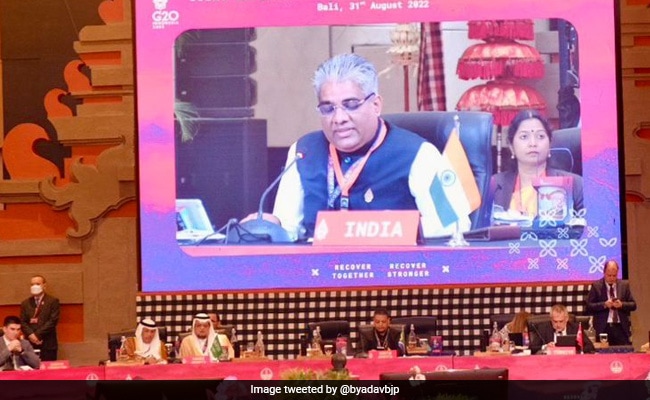 The G20 Environmental & Climate ministerial meeting was held in Bali.

Union Environment Minister Bhupender Yadav on Wednesday said India is showing intent as a problem solver despite not being a traditional contributor to global emissions.

Addressing the opening ceremony of the G20 environmental and climate ministerial meeting in Bali, Indonesia, he also said the current pace and scale of climate finance from developed countries is not matching the global aspiration to combat climate change.

“While India has not been a traditional contributor to global emissions, we are showing the intent in our actions to be a problem solver,” he said.

Mr Yadav said the maximum impact of the climate crisis is being borne by the poorest countries and most vulnerable communities, which have contributed the least to the climate crisis and lack the technology and capacity and finance required to significantly alter the status quo.

“There is an urgent need to mobilise resources to stimulate the economy in a manner that makes it more resilient and sustainable. But the current pace and scale of climate finance from developed countries is not matching the global aspiration to combat climate change,” Mr Yadav said.