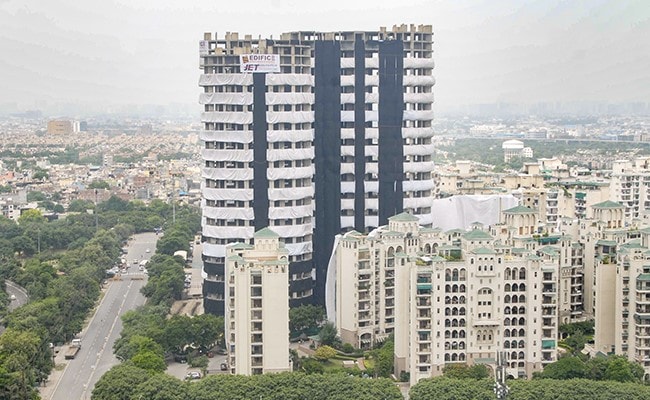 The Supertech towers were built against norms, thus ordered to be demolished by Supreme Court last year.

All wall-hangings off, clothes and all stuffed into cupboards and beds, TVs uninstalled, windows shut tight, and everyone out of the house until an all-clear — that’s the drill for residents of adjoining societies as Supertech’s 100-metre-tall, illegal twin towers in Noida’s Sector 93 are finally demolished in a controlled blast on August 28.

While the two towers — Apex (32 floors) and Ceyane (29 floors), being razed on Supreme Court orders — did not yet have any residents, there are at least 7,000 people in the vicinity who’ll have to leave at 7am on August 28, and be back by the evening.

The demolition — the biggest such project in India in recent memory — will be triggered at 2.30pm.

“We have set 3,700 kg explosives,” said Mayur Mehta, project engineer for Edifice Engineering, the company engaged by Supertech and Noida authorities for the demolition.

“There are 20,000 connections that will all be combined on the day of the demolition,” he added.

Some buildings of two adjoining societies, Supertech Emerald Court and ATS Village, are barely 9 metres from the twin towers. 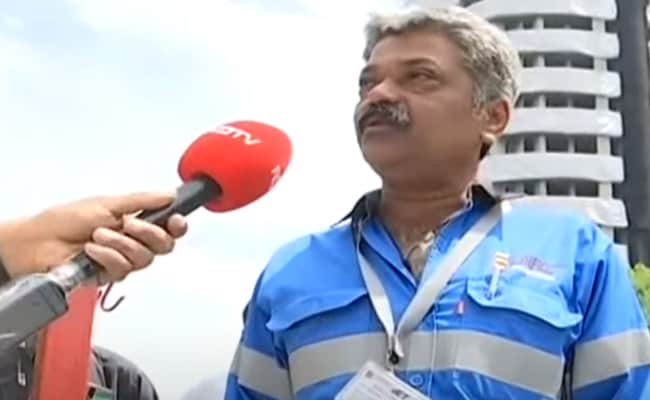 Mayur Mehta, project engineer for the demolition company, explained the numbers and method.

Mr Mehta addressed fears of vibration endangering those structures. “Noida is designed to withstand earthquakes of Seismic Zone IV,” he said. Structures built as per the norms, thus, can handle earthquakes of magnitude 6 on the Richter scale.

“This explosion will only trigger one-tenth of a Richter scale-4 earthquake. It’s safe,” he said. These tremors will be felt only up to 30 metres.

“We hired a UK-based firm, Vibrotech, which found that this explosion will trigger a vibration of 22 to 34 mm per second. A typical earthquake that’s 4 on the Richter scale causes 300 mm per second,” he explained.

Until the dust settles

“There will be lots of dust. That is a major issue; no point denying it,” said Mr Mehta. “But Noida authorities have already kept machines and labourers ready to start the clearing of debris immediately after the demolition. Our staff will also be there.”

“They will clean up the adjoining societies, houses and the roads,” he added. A building next to the to-be-razed twin towers covered in special fabric to minimise dust penetration.

The demolition comes after several deadline extensions, almost exactly a year after the Supreme Court, on August 31 last year, directed builder Supertech Pvt Ltd to demolish the 40-storey twin towers within three months. It also gave directions to prosecute Noida officials involved in approving maps and building plans in violation of norms; and a refund for all homebuyers with 12 per cent interest.

But finding the right technology to ensure a safe demolition remained a challenge.

The towers were 40 floors each originally. Some of the upper floors were demolished using manual labour to lessen the scale of the eventual razing.

“We will be using the ‘waterfall implosion’ technique,” said Mr Mehta. “This means the basement will collapse first, and then the floors above will collapse one by one.”

They’ve called in experts from South Africa. “Three of them will be present on the day, besides me.”

Who will press the trigger? Mr Mehta said the Noida authorities will depute a blaster, besides a police officer, for the core team.

“Success is guaranteed,” he said, adding, “We do seek good wishes and blessings from everyone, though.”

Out of the way, but not quite

Area up to 450 metres from the site — including portions of the Greater Noida Expressway — will be cordoned off. All traffic, from vehicles to stray animals, will be stopped. A no-fly zone has also been imposed for around half an hour, from 15 minutes before the blast to until the dust settles.

“The core team will be standing 100 metres away, out of the way of the wind direction that day,” said Mr Mehta.

Residents are anxious but ready with plans of their own.

“We have been told to leave by 7am that morning. But our family will leave a day before that, to stay with relatives in Delhi,” said Rajinder, one of the residents of an adjoining society, Emerald Court. “Some people are staying in clubhouses of nearby societies too.”

He told NDTV that people have removed valuables. “Besides removing wall hangings and TVs, we have covered up the ACs, removed appliances that may be sensitive. The gas line is also switched off,” he added.

They expect to return by 4 in the evening on Demolition Day.

The razing isn’t the last step, though. It will leave behind a massive 35,000 cubic metres of debris. A large part will fill up the basement of the towers, and the rest will be dumped at an isolated location within Noida and processed scientifically, officials have said.