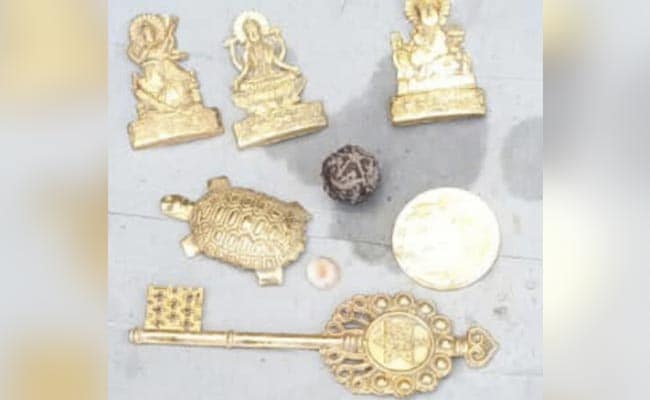 A huge crowd gathered to see the idols, they discussed the ‘miracle’ and made offerings.

Ashok Kumar and his sons, Ravi and Vijay, from Mahmudpur village in Unnao district, recently bought a few metal idols of gods and goddesses online and buried them in their field. The next day, they spread the news that the idols had been unearthed from their field during tilling.

How did they know about the presence of the idols: a dream, they claimed.

Everything went according to their plan initially. A huge crowd gathered to see the idols, they discussed the ‘miracle’ and made offerings.

The ‘miracle’, however, was short-lived.

After getting the information on Tuesday, the police informed the archaeological department about the idols. The police said they grew suspicious and started an investigation as the idols didn’t look ancient but brand new. They took a local, a delivery man of an online website, into custody, who revealed Ravi had ordered a set of idols for Rs 169.

Ashok Kumar and his sons were arrested soon after. After hours of interrogation, they admitted that they had bought the idols off the online website and buried them in the field to become famous and rich. Police sources say they collected around Rs 30,000 in donations.

“They were fleecing the villagers through their cooked-up story. During investigation it was revealed the idols were bought online,” said Bangarmau circle officer Pankaj Singh.

“We are taking necessary action against the accused,” he added.