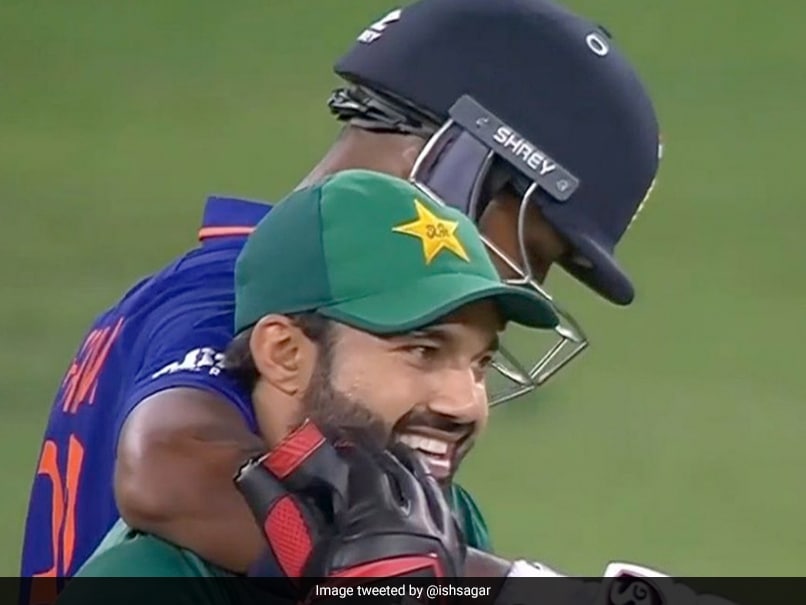 Hardik Pandya‘s all-round performance helped Team India script a win over Pakistan in their Asia Cup clash on Sunday in Dubai. Started from scalping three wickets to smashing 33 runs off 17 balls, Hardik took India across the line with his winning six. Apart from his blistering performance, another thing which won everyone’s hearts was when Hardik hugged Pakistan wicketkeeper-batter Mohammad Rizwan from behind, during the game. The picture soon went viral on the social media and the fans could not stop lavishing their praise for the lovely gesture made by the players of the both the countries.

The Asia Cup clash between India and Pakistan has been giving such heartfelt moments to cricket fans, since a long time now. Earlier last week, stars like Virat Kohli, KL Rahul, Yuzvendra Chahal, and Rishabh Pant interacted with Shaheen Shah Afridi who is ruled out of the tournament due to an injury. It was then that Shaheen told Virat that he wishes to see him back in form. He also joked with Pant that he wishes to hit one-handed sixes like him.

All-rounder Hardik Pandya was at his best as he brought his A-game to help Team India defeat Pakistan by five wickets in the Asia Cup Group A clash on Sunday at the Dubai International Stadium. Pandya scored 33 runs off just 17 balls with the help of 4 fours and 1 six to chase down 148.

India needed 6 runs to win from 4 balls and Hardik then played a dot ball against Mohammad Nawaz. It was then that Hardik gestured towards Dinesh Karthik, indicating that he has gotten it under control. It is important to note that as soon as he made the gesture, on the very next ball he ended up hitting a six.

Bhuvneshwar Kumar had returned with figures of 4-26 in his four overs as India bundled out Pakistan for 147. The experienced seamer also got the key breakthrough of Pakistan captain Babar Azam in the third over of the innings.

Team India will next square off against Hong Kong in Group A clash on Wednesday.