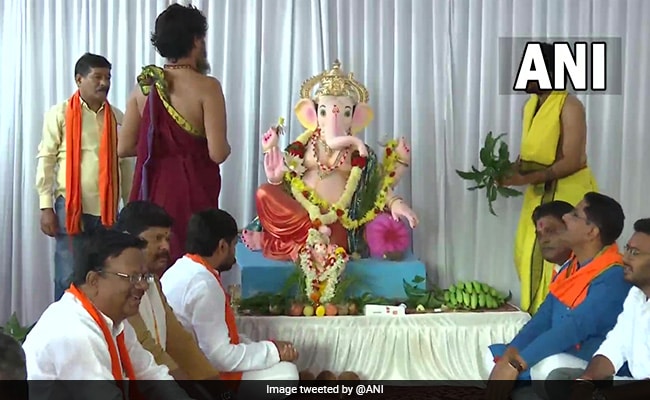 Ganesh puja preparations could be seen taking place at the ground in Hubbali.

Ganpati idol was installed at the Eidgah ground in Hubbali-Dharwad after the Karnataka High Court upheld the authorities’ decision to allow the Ganesh Chaturthi celebration at the ground.

The Karnataka High Court, in a late night hearing on Tuesday, upheld the authorities’ decision to allow Ganesh Chaturthi celebration at the Eidgah ground.

The court dismissed the plea filed by Anjuman-E-Islam and refused to interfere with the decision of the authorities to permit the celebration at Eidgah ground.

Preparations could be seen taking place early in the morning following the High Court’s order last night, and a Ganpati idol was installed.

“Puja will be conducted in the traditional way and we’re going to celebrate this festival for three days as per the direction of the Municipal Corporation. We’re going to follow all the instructions that have been issued,” said Mr Rao.

Stating that Rani Chennamma Maidan belongs to the Municipal Corporation, the convener said they had made a request to allow the celebration of the festival.

“Rani Chennamma Maidan belongs to Municipal Corporation, so we had requested on behalf of Samiti Mahamandal that this Ganpati Utsav should be allowed here,” he said earlier this morning.

In a late-night hearing on Tuesday, Justice Ashok S Kinagi of the Karnataka High Court dismissed the plea filed by the Anjuman-E-Islam and refused to interfere with the decision of the authorities to permit the celebration of Ganesh Chaturthi at Eidgah ground at Hubbali-Dharwad.

The court noted that the ground in dispute belongs to respondent authorities and they are carrying out regular activities there. It said the interim relief sought by the petitioner does not deserve merit and the same is rejected. The court also said that the petitioner is not entitled to the benefit of the interim order passed by the Supreme Court.

Some Hindu organisations had submitted an application to install Ganesh idols and hold cultural activities on the ground. Dharwad Municipal Commissioner had granted permission for celebrating the Ganesh Chaturthi festival under certain conditions. The authorities’ decision was then challenged in the Karnataka High Court by the Anjuman-E-Islam.