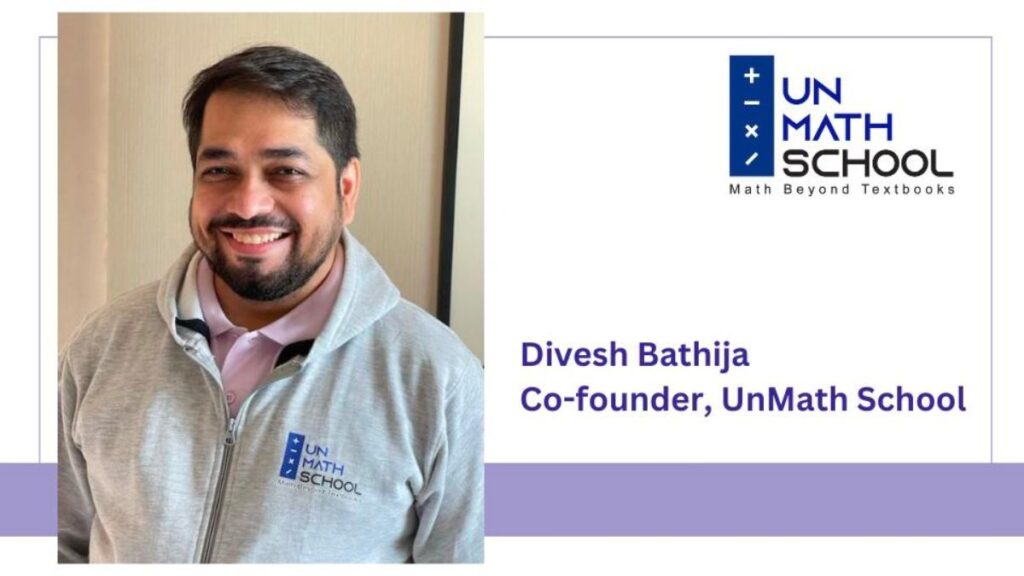 UnMath School was created as a result of a visionary, who believed in changing people’s perceptions of mathematics and fostering a “no textbook” culture- Divesh Bathija, co-founder of UnMath School, who quotes and holds to “Mathematics is a language that is spoken by none but misinterpreted by all.”

Divesh has been acclaimed and recognized by corporations like Midday, YourStory, NDTV, etc. for his outstanding efforts on behalf of the brand and a strong foundation.

When it comes to running his own business, Divesh is the epitome of confidence and insight. Prior to founding his own business, he served as a financial advisor for renowned firms like Kotak and Cushman & Wakefield. He has collaborated closely with a few notable universities as a visiting faculty member as well.

By utilizing his intrepid spirit of entrepreneurship and math skills, Divesh is on a journey to transform the way we typically study math. His charisma and commitment to “making math interesting” had a significant role in shaping UnMath School into what it is today.

Divesh Bathija co-founded UnMath School, with his business and life partner Raashi Bathija, in 2012. When faced with typical business challenges, Divesh is someone who is always able to come up with creative solutions and think outside the box. He can swiftly change course and put into place the required fixes to advance both personally and professionally.

His vital contributions to the field of mathematics are greatly aided by his role as the Math Storyteller.

His ambition when founded UnMath was to “reintroduce” mathematics, a valuable yet commonly misinterpreted subject. Instead of the typical score-fetching stance, he urged students to approach mathematics conceptually.

He embraces the concept of outcome-based education (OBE), which aids students in understanding mathematical ideas outside of the sphere of textbooks. In order to significantly improve the school’s present system, he has played an instrumental role in developing math based experiences.

A determined entrepreneur and a math enthusiast who forges chances for both the brand and himself, Divesh has the capability to be resourceful, has a mindset of a can-do attitude, and is willing to also collaborate creatively to run UnMath School.

“He always inspires his team members and encourages them to grow with the brand.” asserts the Marketing Specialist of UnMath School.

Over the years, UnMath’s creative mathematics curriculum initiative has been implemented in over 250 schools in India, Nepal, the United States, the United Arab Emirates, and Sri Lanka, training over 50,000 students and mentoring over 10,000 teachers.