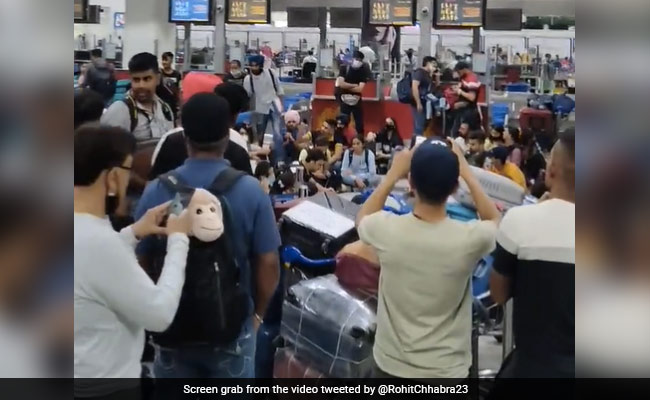 Lufthansa operates two flights from Delhi to Frankfurt and Munich, which were cancelled.

Germany’s flag carrier Lufthansa airline has cancelled 800 flights globally due to a one-day strike by pilots, resulting in around 700 passengers being stranded at the T3 terminal at Delhi’s Indira Gandhi International (IGI) Airport. Stranded passengers and their relatives registered strong protests last night at Delhi airport.

“An information was received at IGI Airport at 12.15 AM, in which it was conveyed that crowd has gathered on the main road in front of Departure gate no. 1 Terminal 3 IGI Airport. On reaching the spot, it was found that around 150 persons were present there and due to this traffic moment had slowed down. The crowd was demanding refund or alternate arrangement to be made for their relatives who were present inside the terminal building,” airport police said.

Lufthansa airline operates two flights from Delhi to Frankfurt and Munich, which were cancelled on Friday.

“Both the flights were cancelled by the Lufthansa headquarters due to a one-day worldwide strike of all pilots of Lufthansa airline for appraisals,” said Airport police.

Security concerns had arisen at the Delhi airport last night due to the movement of Lufthansa passengers at the terminal building following the cancellation of a Lufthansa Airlines flight.

“On enquiry, it was found that the crowd mostly comprised of family members/relatives of passengers of flight no. LH 761 and LH 763. When they were informed that the flights had been cancelled without any prior intimation they became agitated. The airport staff along with CISF handled the situation. The gathering dispersed shortly. Efforts are being done to make alternate arrangements for the passengers by the airline company,” said Tanu Sharma, DCP, IGI airport.

In a viral video, passengers were seen shouting at the airport, asking for justice and a refund. Officials have pointed out that most of those supposed to travel by Lufthansa last night were students.

Lufthansa said while it was working to normalise the situation, “isolated cancellations or delays” on Saturday or Sunday were also possible.

The pilots’ union Vereinigung Cockpit (VC) confirmed overnight that Lufthansa pilots would stage an all-day strike on Friday both for flights by the core passenger business and its cargo subsidiary, German News Agency DPA reported.

Vereinigung Cockpit says it is demanding a 5.5 per cent pay rise this year for its more than 5,000 pilots, as well as automatic inflation adjustments for 2023, but said discussions had failed.

During the coronavirus crisis, Lufthansa terminated agreements and started setting up a new airline with lower pay scale conditions, bypassing the collective deal.

“We have not received a sufficient offer today either,” said Vereinigung Cockpit spokesperson Matthias Baier. “This is sobering and a missed opportunity.”

Michael Niggemann, Chief Human Resources Officer and Labor Director of Deutsche Lufthansa AG, said, “We cannot understand VC’s call for a strike. The management has made a very good and socially balanced offer – despite the continuing burdens of the Covid crisis and uncertain prospects for the global economy. This escalation comes at the expense of many thousands of customers.”

According to the statement, the group has presented an offer with an 18-month term, in which the pilots at Lufthansa and Lufthansa Cargo will receive a total of 900 euros more in basic pay per month in two stages. This will benefit entry-level salaries in particular.

An entry-level co-pilot will receive more than 18 per cent additional basic pay over the duration of the agreement, while a captain in the final stage will receive 5 per cent. With the agreement for the ground staff, the group has shown that it is prepared to make significant pay increases.