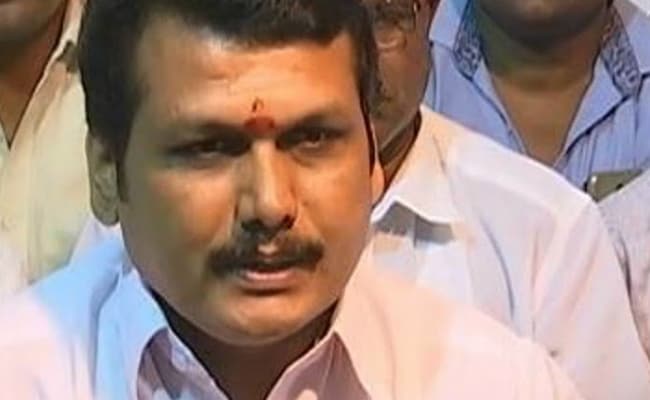 The writ petition of minister sought to quash the summons dated April 29 this year. (File)

The Madras High Court has restrained the Enforcement Directorate (ED) from proceeding further against Tamil Nadu Electricity Minister V Senthil Balaji and two others in connection with an alleged job recruitment scam.

A division bench of Justices T Raja and K Kumaresh Babu granted the relief while passing final orders on the writ petitions from B Shanmugam, R V Ashok Kumar and Senthil Balaji on Friday.

The writ petition of Mr Balaji sought to quash the summons dated April 29 this year issued by the ED as illegal, unconstitutional, and non est in the eye of law and consequently declare the investigation in the case against him in 2021 as illegal and unconstitutional.

The first petitioner Shanmugam was in the field of Desktop Publishing (DTP) from 1991 and providing services of manpower towards the recruitment in private, government and non-governmental organisations for the jobless youths on minimum consultation charges.

When the State Transport department, headed by Senthil Balaji as minister in the previous AIADMK regime announced the recruitment process in 2014, many aspirants approached him and he offered consultation after collecting fees. But they did not get the job. However, the matter was settled amicably, petitioners claimed.

Mr Balaji’s senior counsel contended that since the petitioner came out from the then ruling party (AIADMK), the summons started coming in though his name was not found in the FIRs. Only after the supplemental charge sheet was filed, he was shown as Accused No.1 for the offence under various sections including cheating and the Prevention of Corruption Act.

When the case was registered on July, 29, 2021, the ED did not have any material against the petitioner to bring him under the PMLA, because it itself had moved an application on November 8, 2021 seeking for production of First Information Reports. The request for furnishing the unmarked documents was refused by the trial court, against which the ED came to the High Court. The High Court on March 30 this year had permitted the ED to peruse the documents and take notes thereof.

Aggrieved by this order, another accused in the case moved the Supreme Court, which stayed the operation of the March 30 order of the High Court and the matter was pending in view of the stay granted by the Supreme Court. When the Supreme Court felt that there should be tangible and credible evidence to proceed under the Prevention of Money Laundering Act, without there being any such evidence, the summons under Sec. 50 of the Act cannot be issued to the petitioner.

Even ED’s November 8, 2011 application before the trial Court to produce the documents showed that they did not have any documents. “Therefore, when the respondent (ED) had no material, without making any predicate offence, the ECIR (Enforcement Case Information Report) cannot be registered on July 29, 2021.” “In any event, out of three calendar cases, the proceedings in one calendar case were quashed and the proceedings in two other cases have been stayed. Therefore, during the currency of order of stay, the impugned summons cannot be legally maintainable,” he argued.

Accepting the arguments, the judges said that generally, the summons are issued for the appearance of a party on a particular date. If a party does not appear on the given date, fresh summons demanding the appearance of the person have to be issued. In the present cases, the petitioners had appeared before the ED as and when required on the earlier occasions.

The respondent department has to await the finality of the said proceedings. Needless to mention, if the proceedings in the first case of 2020 and the second one of 2021 are quashed, pursuant to the orders in the applications filed by the respective persons to quash the proceedings, in which event, the ED cannot step in or initiate any proceedings under the PMLA, as held by the Supreme Court in many cases.

Therefore, the ED is refrained from proceeding any further pursuant to the impugned proceedings, till the disposal of the cases pending before this High Court and the Supreme Court, the bench said.