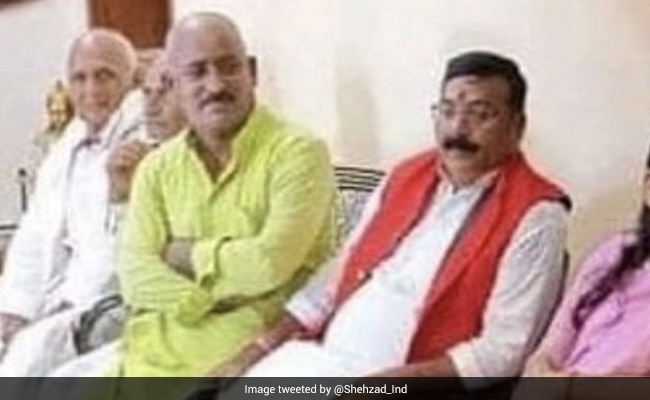 Anand Mohan (wearing red jacket) is serving life sentence for the murder of an IAS officer.

Attorney General K K Venugopal has declined consent for initiating contempt proceedings against 13 people, including jail and police officials, over controversial politician Anand Mohan being allegedly allowed to visit his residence in Patna after his production before a trial court there.

Attorney General Venugopal said attorney general’s contempt jurisdiction is limited to dealing only with instances of criminal contempt of the Supreme Court of India.

Anand Mohan is serving life sentence for the murder of IAS officer G Krishnaiah in 1994.

Mr Venugopal’s decision came on a letter by advocate Brajesh Singh who had sought initiation of contempt proceedings against 13 people for allegedly deliberately interfering in and obstructing the administration of justice for allegedly allowing Mohan to roam out of the Saharsa jail for about 47 hours.

The lawyer had quoted media reports and sought action against 13 people including police and jail officials.

“I have examined your request for consent to initiate proceedings for criminal contempt of the Supreme Court of India against 13 named persons in connection with the production of Mr Anand Mohan before the trial court of Patna.

Six police personnel were suspended in connection with the incident involving controversial politician.

As per section 15 of the Contempt of Courts Act, the nod of the Attorney General or the Solicitor General is a condition precedent to set the criminal contempt proceedings in motion before the top court.

Mohan, who is serving life sentence for the murder of IAS officer G Krishnaiah, was brought to Patna last week to be produced before a court The self-styled Robinhood who liked to get photographed in those days holding a pistol, surrounded by a posse of armed henchmen, Mohan was associated with the undivided Janata Dal but broke away to form his own party.

Both Mohan and his wife have been members of the state legislative assembly and the Lok Sabha in the past.

Mohan was awarded the death penalty by the trial court in the murder of Krishnaiah, then the Gopalganj district magistrate who was lynched in 1994 by a mob on the outskirts of Muzaffarpur allegedly incited by the politician.

The death penalty was later commuted to imprisonment for life by the Patna High Court. Many other co-accused in the case were acquitted for want of evidence though appeals of Mohan against the trial court order were set aside by the high court as well as the Supreme Court.