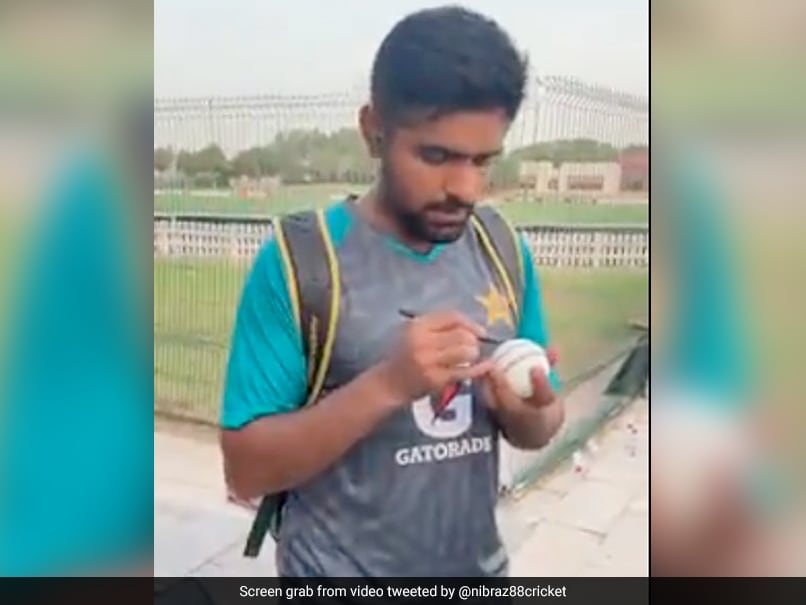 Babar Azam signs a cricket ball for a fan

The Asia Cup will begin in the UAE from August 27 and the teams have already arrived for the continental tournament. The big clash is slated for August 28 as India will lock horns with eternal rivals Pakistan. Both the Indian and Pakistani teams have started their practice in Dubai and their fans have been visiting the arenas to get a glimpse of their favourite stars.

The Pakistani cricket team for long played its home matches in the UAE and enjoys a huge fan following in Dubai and other parts of the country.

It was here last year that Babar Azam and Mohammad Rizwan put on a show of strength after Shaheen Afridi had toppled India’s top order to help Pakistan register their first ever win over the arch rivals in the T20 World Cup. The team went on to reach the semis, where they were edged by eventual champions Australia.

Babar Azam has since gone from strength to strength and is now among the top batters in the world across formats. Undoubtedly he has many fans and one such admirer asked Babar for his autograph in Dubai. The video has gone viral on social media.

In it the fan can be seen shouting Shadab Khan‘s name at first,  but then he goes bonkers in excitement once he sees Babar approaching.

He can be heard pleading Babar for an autograph and the Pakistan captain didn’t disappoint as he signed the cricket ball.

Babar will be in focus in the match against India and also in the rest of the tournament as the ‘Men in Green’look to win the continental title for the first time in a decade.

India are two-time defending champions and hold the record for winning the title most number of times, which is seven.