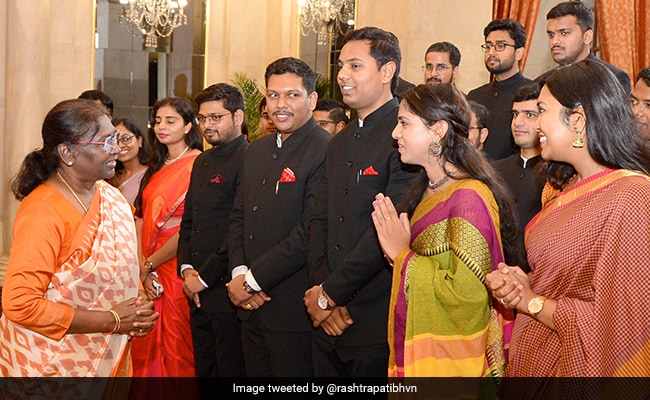 The President said civil servants should be guided by their dedication to public service.

President Droupadi Murmu on Thursday said civil servants should try to reach underprivileged people, and reminded them that welfare initiatives can be rated truly successful only if their benefits reach those in the lowest strata of society.

Addressing a group of 175 Indian Administrative Service (IAS) officers of the 2020 batch, President Murmu said it was expected from civil servants to reach the last person or the most deprived person in their area of responsibility and improve their living condition.

“They can open up opportunities for those who are not aware of welfare schemes or development programmes,” she said.

The President said civil servants should be fired by their passion to make their area “number one” in terms of human development indices.

“And they should feel pride in transforming the lives of the underprivileged. They should be sensitive to the people they are duty-bound to serve,” President Droupadi Murmu added.

She said “Vasudhaiv Kutumbakam” (the entire world is one large family) is part of the great Indian ethos, and “Bharatamev Kutumbakam” (all India is my family) should be integral to the ethos of civil servants belonging to all-India services.

The President also reminded them that any welfare initiative can be rated truly successful only if its benefits reach the poor, the downtrodden and such other people at the lowest strata of society.

With tremendous growth in infrastructure, it has become easier to reach remote parts of the country, and civil servants should try to reach the underprivileged people, she said.

The President said civil servants should be guided by their dedication to public service, empathy and compassion towards the weaker sections, and should maintain the highest standards of integrity and conduct, and impartiality and objectivity.

Addressing the officers, she said they are expected to be especially mindful and active with respect to constitutional provisions related to Panchayati Raj Institutions, administration and control of Scheduled Areas and Scheduled Tribes, and provisions about administration of tribal areas in the north-east mentioned in the Sixth Schedule.

These IAS officers, currently deputed to various Union ministries and departments as assistant secretaries, called on the President at the Rashtrapati Bhavan here, an official statement said.

Addressing them, the President said that as civil servants, they have an important role to play in the emergence of India as a global hub of knowledge, supply-chain, innovation, technology-development and various other fields.

At the same time, India has to strengthen the leadership position it has taken in the areas of socially inclusive and environmentally sustainable development, she added.

Pointing to the fact that by 2047, officers of the 2020 batch will be among the senior-most decision makers, the President said that by working with passion and pride, they can ensure that the India of 2047 will be more prosperous, strong and happy.

She said for shaping that India of 2047, the civil servants will have to work with a modern and service-oriented mindset.

Presiden Droupadi Murmu noted that Mission Karmayogi is a major initiative to make our civil servants more modern, dynamic and sensitive in their approach.