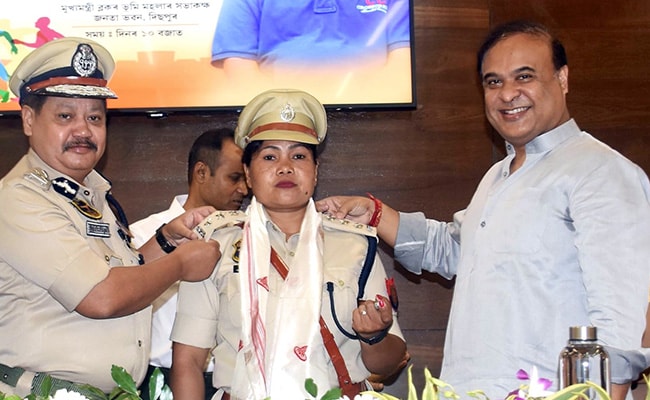 Himanta Biswa Sarma on Saturday handed over the appointment letter to Nayanmoni Saikia.

Assam Chief Minister Himanta Biswa Sarma on Saturday handed over the appointment letter as Deputy Superintendent of Police (DSP) and a cheque of Rs 50 lakh to Commonwealth Games gold medalist Nayanmoni Saikia, as part of his government’s decision to give Class-I government jobs to the winners of Olympic, Commonwealth and Asian Games.

Speaking to ANI after receiving the letter from the Chief Minister, Nayanmoni Saikia, who defeated South Africa in the final of the women’s fours event in Lawn Bowls to clinch gold, lauded the sports policy of the Assam government and said that she will stride to keep performing well.

“I am feeling happy. Assam government has made a good sports policy. I hope the new generation will be attracted towards sports. We will try to keep playing well,” she said.

Meanwhile, the Chief Minister tweeted, “Glad to participate in Sports Pension Day function held to honour the achievements of Arjuna Bhogeswar Baruah. Presented a one-time assistance of Rs50,000 to four noted sportspersons, while four others will receive regular sports pension of Rs 10,000 every month.”

“Also gave away Bir Chilarai Awards to four NCC cadets for their outstanding performance that include an amount of Rs25,000. Further, handed over Rs50 lakh to Smt Nayanmoni Saikia, who recently won Gold at the Commonwealth Games and has been appointed Deputy Superintendent of Police (DSP,)” he added in his tweet.

The Indian Lawn Bowls team created history by winning its first-ever medal in the sport, capturing Gold by defeating South Africa in the final of the women’s fours event at the ongoing Commonwealth Games 2022 in Birmingham on August 2.

The action was back and forth between India and their opponents, who are among the best teams in the sport with 44 medals. India were represented by Rupa Rani Tirkey, Nayanmoni Saikia, Lovely Choubey and Pinki Singh in this historic match. India won the match by 17-10.

India started the match with a lead before South Africa fought back to make things 2-2.

India kept dominating their opponents as after End 7, the score read 7-2 in their favour.