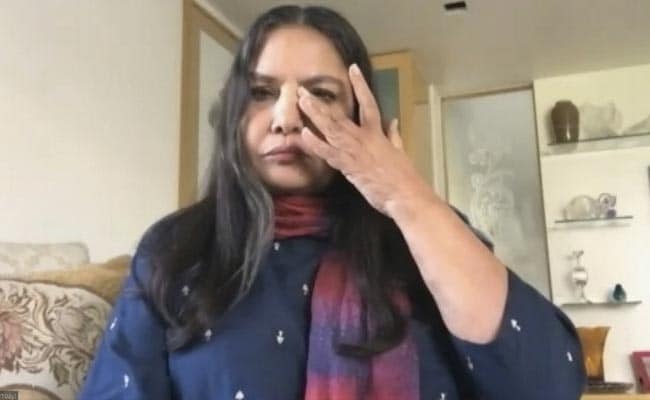 Shabana Azmi said in an interview to NDTV: “I have no words except that I am deeply ashamed”.

Shabana Azmi today broke down as she expressed her shame and horror at the Bilkis Bano case convicts being freed by the Gujarat government last month, 15 years after they were jailed. The acclaimed actor said she was stunned at the sheer injustice of it and the silence of the society in general.

“I have no words (for Bilkis Bano) except that I am deeply ashamed. I have no other words,” Shabana Azmi said in an interview to NDTV.

Bilkis Bano was 21 when seven members of her family were killed in the 2002 Gujarat riots. The attackers were her neighbours; they killed her three-year-old daughter by bashing her head against rocks. Bilkis, who was five months pregnant, was gang-raped.

On August 15, as the nation celebrated 75 years of Independence, the 11 rapists walked free as special remission granted by the state, and they were greeted with sweets and garlands.

“This woman has had such a huge tragedy. And yet she didn’t lose courage. She fought all the way. She got these people convicted and, like her husband says, just when she’s about to bring her life together, this great travesty of justice happens,” Shabana Azmi said.

“Should we not fight for her? Shouldn’t we be shouting from the rooftops so that justice is done to this person? And the women who are feeling unsafe in this country, women who face the threat of rape everyday – shouldn’t they get some sense of security? What do I answer my children, my grandchildren? What can I say to Bilkis? I am ashamed.”

Shabana Azmi joined a recent protest by students and women’ groups in Delhi and also shared a video asking for justice.

“I just expected there would be an outpouring of outrage. I waited two days, three days…There was such little visibility in the media.”

Many, she said, were not even aware that the 11 convicts had been released.

On the Centre claiming it had no role, she questioned how the Gujarat government could take such a big step without a go-ahead from Delhi.

Women MPs were not speaking up, though they should rise above party lines and speak as women, she said.

“Nothing like this happened. You are giving them prasad. What is the signal you are giving? You expect people will silently accept it as a matter of course? I am speechless.”

The 71-year-old actor said she was baffled that of all countries, it happened in this country, where people came out on the streets in the Nirbhaya case.

“Why this complete silence in Bilkis case?” – she wondered.

Most debates were reduced to a Hindu-Muslim row, she said.

“It seems like there is a conspiracy to use this moment and create more communal tension and fissures in the community, maybe with an eye on elections. What else can you imagine this silence is for?”

Ms Azmi said she couldn’t imagine the justification being offered about the convicts being “Brahmins” and “from good families”.

“They are Brahmins, they are sanskari, they don’t know whether they even did this…You are saying this about people who have been convicted. You are not talking about innocent people. There is no question that they committed the crime.”