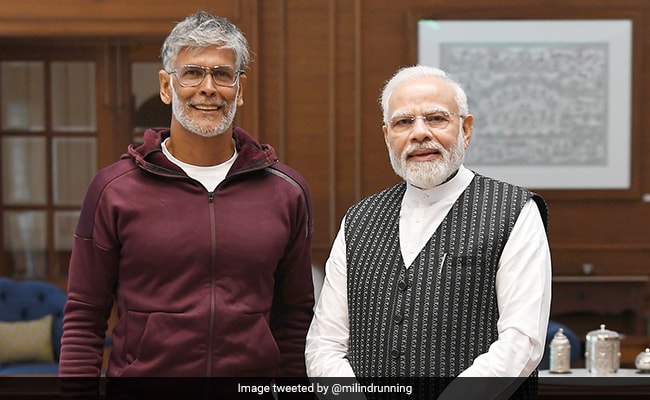 Model and actor Milind Soman on Wednesday met Prime Minister Narendra Modi in Delhi upon completing the Unity Run 2022 that began in Jhansi on Independence Day. Over the course of eight days, Milind Soman ran approximately 451 km, covering nearly 53 km per day. On reaching Delhi, the actor met with the Prime Minister and shared a photo from the interaction on Twitter.

Sharing the picture, Milind Soman said, “Was so happy to meet Honorable Prime Minister Narendra Modi at the office of the  Prime Minister after the Unity Run and discover a mutual interest in ancient Indian traditions of sport, health and fitness. I thanked him for all he is doing to promote Yoga and Ayurveda across the country.”

Was so happy to meet Hon PM @narendramodi at @PMOIndia after the #UnityRun and discover a mutual interest in ancient Indian traditions of sport, health & fitness 🙂 i thanked him for all he is doing to promote Yoga and Ayurveda across the country @FitIndiaOff#JaiHindpic.twitter.com/yDXbUf8IfV

In a separate post on Instagram, Milind Soman also shared an image of him gifting a “Balakrishna” idol to PM Modi. In the caption of the post, the actor mentioned that his wife Ankita Konwar brought the idol from Vrindavan during Janmashtami.

Milind Soman, after reaching Red Fort at the end of the run, had shared a video in which he is seen waving the National Flag. “And reached. Jhansi fort to Red Fort – Highways, Sun, rain, heat, blisters, I run for fun, but I will share the lessons I learnt soon,” he wrote in the side note.

In addition to his three-decade career in modelling, Milind Soman has appeared in Hindi films such as Chef and Bajirao Mastani.