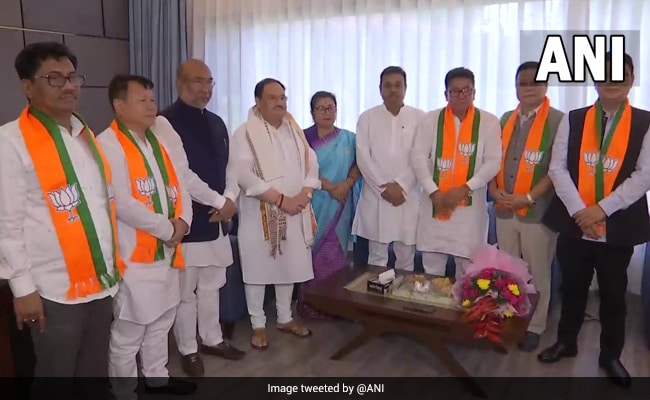 Five Janata Dal (United) MLAs, who merged with the ruling party BJP, joined the Bharatiya Janata Party (BJP) in the presence of party President JP Nadda in the national capital on Sunday.

The merger of JD(U) MLAs with BJP has delivered a big jolt to the Nitish Kumar-led Janata Dal (United) in the northeast.

The Bharatiya Janata Party secured a majority of 32 seats in the 60-member state Assembly in the recently held Assembly elections, results of which were declared on March 10.

The JDU chief said, “Whatever happened in Manipur (merger of JDU MLAs into BJP) was done by BJP using money power. For the PM, coming together of opposition parties is corruption. They can do whatever they want but JD(U) will become a national party by 2023.”

The JDU chief alleged that Prime Minister Narendra Modi is changing the definition of corruption and virtue. A corrupt individual becomes clean and washed after they join the BJP.

Earlier bulk of the JDU MLAs joined the BJP in Arunachal Pradesh giving a nightmare to Nitish Kumar’s party.

Back on 25 August, the lone JDU MLA from Arunachal Pradesh also joined the BJP in the presence of national president JP Nadda and Arunachal CM Pema Khandu.

The latest political developments come weeks after Nitish Kumar dumped the BJP and joined hands with Tejashwi Yadav’s Rashtriya Janata Dal, the Congress and other parties to govern Bihar.

Those aware of the development say that the BJP has decided to hit back at the JDU after what transpired in Bihar recently. In 2020 the BJP-JD(U) fought election in an alliance and went on to form the government with Nitish Kumar being given the chief minister’s post.

In less than two years’ time, Nitish Kumar flipped his choices and in a surprise move went on to stitch an alliance with RJD and Congress to form a ‘Grand Alliance’ government in Bihar.

Earlier this week, JP Nadda was on a two-day visit to Tripura, which is slated to go to Assembly polls next year.

JP Nadda lauded the “all-round development of Tripura” under Prime Minister Narendra Modi and said the government has “brought an end to political violence” by creating an “atmosphere of peace”.

He also slammed the previous Communist Party of India (Marxist) government for “encouraging terrorism and infiltration” in the northeastern state.

Nadda also paid floral tributes to the statue of Dr Shyamaprasad and Deendayal Upadhyaya at the Tripura University and was welcomed by the workers of 8 mandals.

He also visited and prayed at the Matabari temple in Udaipur during his two-day visit.