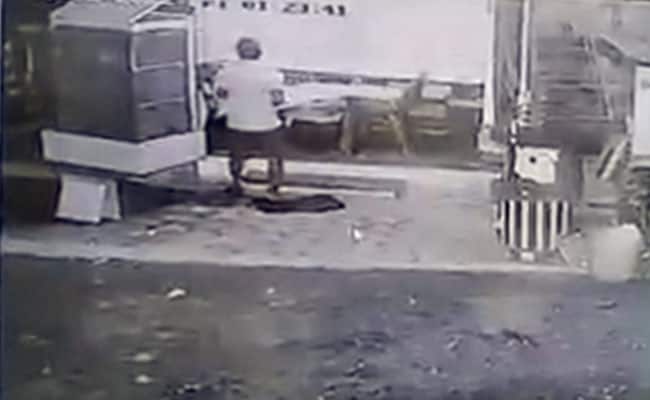 Shiv Prasad killed three security guards in three nights in Sagar and one more in Bhopal.

An alleged serial killer in Madhya Pradesh believed to have murdered four security guards in their sleep has been caught on CCTV attacking one of his victims. The man, identified as 19-year-old Shiv Prasad, was inspired by the blockbuster KGF and wanted to be famous, sources said.

He was arrested early Friday morning in Bhopal after the police tracked down the mobile phone he had allegedly stolen from one of his murder victims.

The chilling security footage shows the killer, in shorts and a shirt, striking his victim and then bashing his head in with a stone. After making sure that no one saw him, he slinks away.

The young man, who only struck in the dead of the night, was inspired by KGF — a Kannada film revolving around an assassin — according to police officer Tarun Nayak. He allegedly told the police he planned to target cops next.

Shiv Prasad killed three security guards in three nights in Sagar and one more in Bhopal last night, the police said. Since his only aim was to be famous, he only targeted sleeping security guards.

The killings, which appeared to follow a pattern, sparked fears of a “stoneman” who strikes only in the dead of the night.

In May, a watchman at an overbridge construction site was found murdered and a shoe was kept on his battered face.

None of the victims were looted.

“It was a blind murder. The police chased him down as he was carrying the mobile phone of his second or third victim. Based on the phone’s location he was caught in Bhopal,” said state Home Minister Narottam Mishra.

On Thursday night, he killed a man called Sonu Verma, 23, using a marble rod. Sonu Verma was a security guard at a marble shop.

Kalyan Lodhi, a guard at a factory, was killed on August 28. His head was smashed with a hammer.

The very next night, a 60-year-old security guard at an arts and commerce college, Shambhu Narayan Dube, was killed with a stone.

The next day the man killed Mangal Ahirwar, a watchman at a house.

The killings triggered terror in the town and patrolling was intensified. CCTV cameras showed a man, believed to be the killer, running.