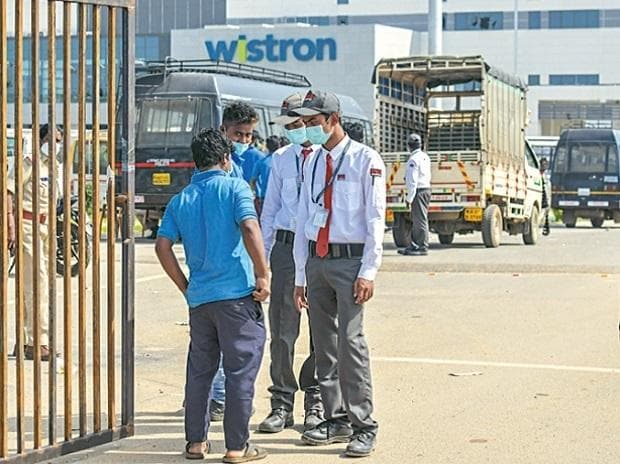 Karnataka Labour Minister Shivaram Hebbar on Monday said that vandalism that took place in Wistron Corporation’s Narsapur plant in Kolar district last year was due to its own fault as it failed to address the issues of the aggrieved employees.


He added that the riot-hit Apple’s contract manufacturer Wistron Corporation has resumed its operations in Kolar after cutting down its contract employee strength from 8,490 to 2,657 from this month.

The minister strongly defended his department asserting that the Wistron had failed to intimate its expansion plans to departments concerned as a result of this the violence went out of its hand.


“Neither the Labour department nor the government is at fault in this case at all,” he said in a reply to a written question raised by the Legislative Council member, Govindraju.


According to written questions (Unstarred) tabled in Karnataka Legislative Council here, the minister said that the plant had grossly violated government’s stipulated norms, such as going overboard in hiring employees under contract system besides changing its eight-hour shift to 12-hour shift without ‘properly intimating’ employees and failing to convey them about their change in salary component.


Hebbar further added that Wistron had failed to act in-time despite ‘aggrieved employees’ repeatedly bringing it to their managers’ notice about their salary getting delayed and their attendance marked improperly.


Listing out reasons, Hebbar added that the sudden change in their working shift from eight hour to 12-hour had not translated into a rise in their salaries.


He added that Wistron also went on recruiting under a contract system without intimating government departments concerned. “The company which started its operations from September 1, 2020, with 3,000 employees, soon its employee strength reached 9,833 by end of October. The company neither informed nor took prior permission from departments concerned,” he claimed.


The minister also added that neither the company nor its aggrieved employees ever bring it to notice of any one departments such as industries, labour, boiler safety, labour welfare, health or to even district administration.


“The plant’s Human Resource department should have addressed distressed employees’ concerns effectively. Due to their failure and negligence, aggrieved employees went berserk,” he added.


The minister asserted that the labour department had taken every step to help aggrieved employees by making the Wistron to clear all dues of employees.


In December last year, a section of the employees of Wistron resorted to violence and damaged the company’s property alleging salary disparity, cut in wages and overwork.


Wistron Infocomm Manufacturing (India) Private Limited, Taiwanese contract manufacturer, is one of the third-party makers of iconic iPhone for Apple and assembles select models in India. It also has an assembling plant at Peenya industrial estate in Bengaluru north, rolling out the iPhone SE model in 2017.