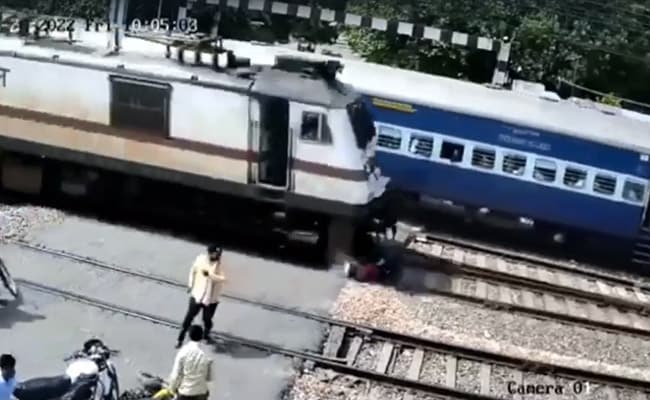 In a narrow escape, a man abandoned his bike and ran for his life moments before a speeding train zoomed past, crushing his vehicle at a railway crossing in Uttar Pradesh’s Etawah. The dramatic escape, which occurred in Ramnagar area of the city last week, was captured on security camera.

The footage showed the biker trying to remove his vehicle from the tracks but it got stuck there. Seeing the Jharkhand Swarna Jayanti Express approaching the railway crossing at high speed, he abandoned it and ran away from the tracks.

Several pedestrians and bikers were waiting on the crossing as another train was passing through the adjacent tracks. Spotting a train on their tracks too, they all moved back, except one whose attempt failed as his bike slipped off the road.

The bike was crushed under the train and some of the mangled parts of the bike were later found near the tracks.

It is learnt that the biker had attempted to cross the tracks even when the crossing was closed and has been issued a notice. He is likely to be arrested as well.