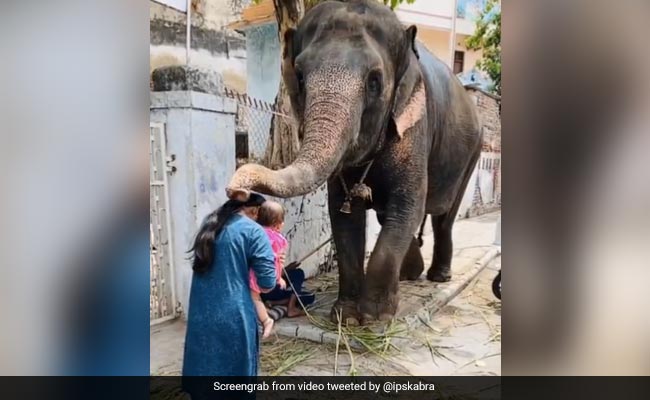 Picture shows the elephant placing its trunk on the woman’s head.

Social media is full of photos and videos showing people welcoming Lord Ganesha on the occasion of Ganesh Chaturthi 2022. They show the preparations people make to welcome Lord Ganesha to their homes, as well as the prasad to be offered. The elephant-headed Hindu god of beginnings is traditionally worshipped before any major enterprise and is the patron of intellectuals, bankers and authors.

On the occasion, some people also worship the elephant, which resembled Lord Ganesha. A video is winning hearts on the Twitter that shows an elephant “blessing” a woman and a child. It has been shared by an Indian Police Service (IPS) Officer Dipanshu Kabra on Twitter.

“May all your prayers be accepted and your obstacles removed and may Lord Ganesh bless you with happiness, prosperity and success,” Mr Kabra wrote in his tweet.

The video begins with a woman taking a child in her lap and standing in front of an elephant. When they bow their heads, the animal places its trunk on her head appearing to bless them.

Since being shared, the video has amassed over 34,000 views and more than 2,700 likes. The post also has hundreds of retweets and comments.

One user shared the video and wrote, “Elephant’s blessings.”

“Kindly look at the elephant. It is showing its leg to the woman to facilitate her to touch its leg (Padasparsh); but the woman is not realising it,” a second user wrote while sharing the video.

The 10-day festival of Ganesh Chaturthi, also known as Vinayaka Chaturthi, celebrates the birth of Lord Ganesha, the god of prosperity and wisdom. It starts on the fourth day (chaturthi) of the Hindu calendar’s sixth month, Bhadrapada.