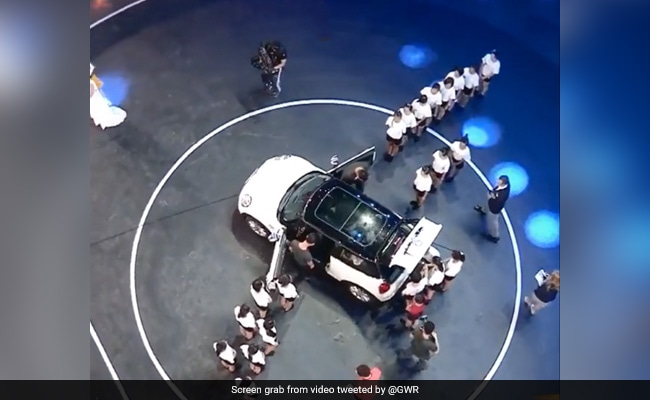 The video, which was posted on September 6, is actually from 2014.

A Guinness World Record (GWR) was set when 27 people got inside a regular-sized Mini Cooper.

Taking to Twitter, the official account of GWR shared a video showing a group of volunteers twisting and turning to squeeze into the vehicle. “How many volunteers can squeeze into this regular-sized Mini Cooper?” read the caption of the post.

How many volunteers can squeeze into this regular-sized Mini Cooper? 😬 pic.twitter.com/wXf4Tihv87

The video, which was posted on September 6, is actually from 2014. The record was set 8 years back in the United Kingdom. Back then, the crew used a variety of techniques to create the record. They adjusted the seats, stacked one person on top of the other and even tried to fit people in the rear compartment of the car.

The three-minute-long clip showed people entering the Mini Cooper one after the another, making space for the next person to fit in. It showed participants curving their bodies and fitting their legs in by helping each other cram inside the small five-seater car.

Since being shared, the video has taken the internet by storm. While some internet users found it quite amusing, others were simply left confused.

A third asked, “What kind of record is this?” “No significance,” commented fourth.

Meanwhile, speaking of bizarre records, a man in the United States recently set a new GWR for riding 61 kilometres in a giant hallowed-out pumpkin that he grew himself. Duane Hansen from Nebraska travelled down the Missouri River and broke the record on his 60th birthday on August 27. Photos on social media showed Mr Hansen crouched inside the giant squash, which weighed in at 384kg (846lb).