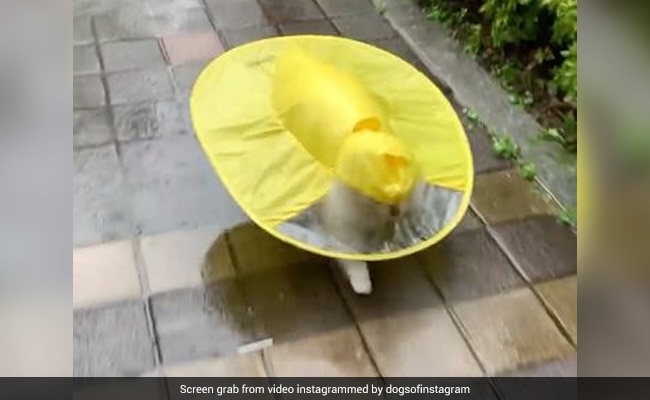 Picture shows the adorable pooch in a cute yellow raincoat.

Pets and their antics can certainly brighten someone’s day. One video gaining traction on the internet shows an adorable little dog trying to protect itself from rain by wearing a raincoat.

The video has been shared by an Instagram page named Dogs Of Instagram. “Cutest little rain trot fetched from @marumarimayo. Does your dog like the rain?” reads the caption.

The clip opens with the little pooch running around in the rain wearing a yellow raincoat. It is also seen entering inside a building and removing extra water by shaking off his body.

Since being shared, the cuteness of little pooch has surprised the internet users. The video has amassed around 1.6 million views and over 98,000 likes so far. Users have flooded the comment section of the post with heartfelt remarks. Several users expressed their interest of getting same rain coats for their dog.

“Boomer needs this, wrote one user, another said, “When you’re workin’ your rain saucer.”

A third user commented, “Omg we just filmed a video like this too.”

Recently, a video went viral on social media showed a woman making that extra effort to keep her pet dog happy. The video was shared on Instagram page @mykomushroom, which is dedicated to the dog named Myko.

The video showed the woman hand-picking popcorn kernels while her cute dog waiting for her below the kitchen counter. It then showed the dog eating popcorn from his ‘movie hoodie’.

“Just a really good boy, hoping for movie suggestions? He’d also love some company,” read the caption of the video. The video received over 3.9 million views, more than 2,300 likes and hundreds of comments.