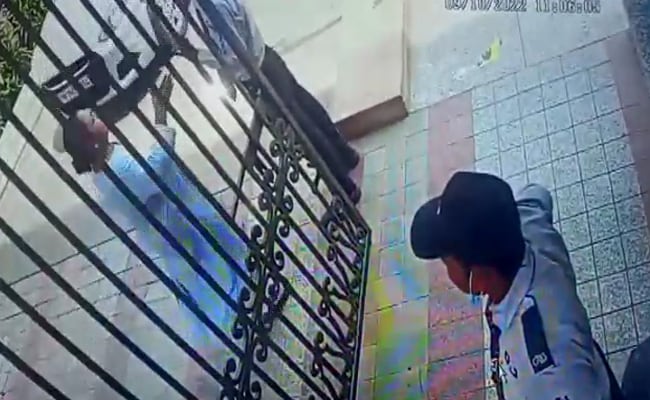 The woman seen slapping the security guard in Nodia

Another month, another slapgate and yet another security guard at the receiving end of this public nightmare. This time in Noida.

A woman professor, Sutapa Das, steps out of her car, wags her finger in anger and walks across to the society’s security guard and lands three sharp slaps across guard Sachin’s face, showed the security footage.

The incident is from Phase 3 in Noida’s Cleo County in sector 121.

Professor Das’s complaint is that the guard was late in opening the gate.

“We were doing RFID work. Her car number was not showing on the RFID. Even after this, we allowed the car in. But she got out and started abusing and hitting us. We dialled 112,” said guard Sachin.

As the woman went about slapping the guard, no one intervened. However, a fellow guard was seen recording the incident on his mobile phone, showed CCTV cameras. The woman was briefly arrested on the guard’s complaint.

“On the basis of the complaint of the guard, a case was registered against the woman. She has been challaned. She has been granted bail,” said phase 3 police station in-charge Vijay Kumar.

The incident comes hot on the heels of another slapgate incident in Gurgaon last month, where a man was seen repeatedly slapping his apartment’s security guard and another person right after he was rescued from a lift.

The same month, a woman was arrested in Noida for manhandling a security guard and using obscene gestures and language. The reason for the aggravated assault was the delay in opening gates by the guard.