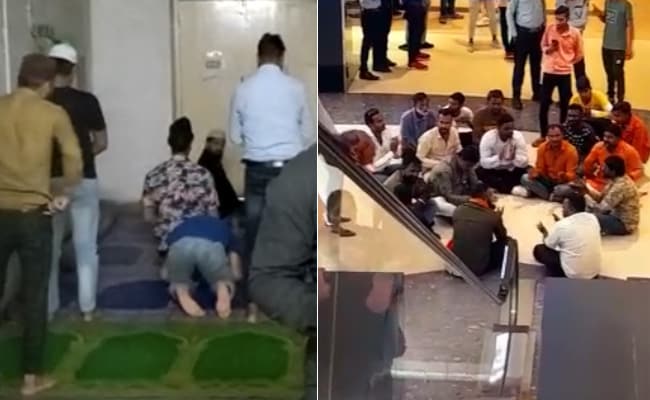 A group of men from right-wing outfit Bajrang Dal held a protest and recited the Hanuman Chalisa at Bhopal’s DB Mall today, objecting to some staff members offering the namaz in a corner of the mall. The mall management later decided not to allow any religious activity there, police said.

In videos of the incident, the Bajrang Dal men first go to the space where some Muslim staff members are offering prayers. The protesting group says they have got information of “all this happening regularly”. A man who appears to be a security guard tries to placate them, and tells them it’s a space in the corner where Hindu staff prays too.

But the Bajrang Dal men insist the namaz is being done “in stealth”, taking pictures and videos. Then they sit on the floor near an escalator in the centre of the mall, and raise “Jai Sri Ram” slogans, besides reciting some prayers.

“Local police went to the mall and resolved the matter amicably with the sides,” said Additional Deputy Commissioner of Police Rajesh Bhadouriya.

“Subsequently, the mall management has issued an advisory that no religious activities be allowed inside the mall premises,” he added.

It’s learnt that the staff used the corner for namaz as going to the nearest mosque — around a kilometre away — takes more time, cutting into their duty hours. The mall management did not speak to reporters.

A group of men from Bajrang Dal held a protest and recited the Hanuman Chalisa at Bhopal’s DB Mall today, objecting to some people offering the namaz there @ndtv@ndtvindiapic.twitter.com/pZEfmn0zCy

Bajrang Dal leader Abhijeet Singh Rajput, who led the protesters, said, “We have been getting information for the last one month that some people were offering namaz in DB Mall. We reached there today and captured 10 to 12 people offering namaz.”

“We spoke to the security supervisors and warned them to stop the practice, or the Bajrang Dal members will recite Hanuman Chalisa and Sundar Kand (a part of Ramayana),” he added.

A similar controversy was seen at a mall in Lucknow in Uttar Pradesh some weeks ago, and was later resolved by banning any kind of religious prayers on the premises.