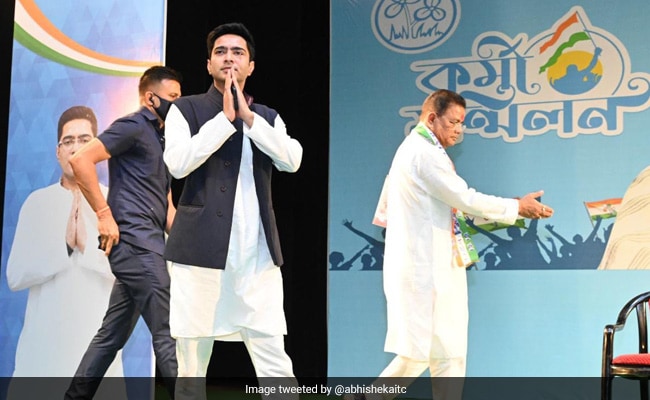 Trinamool attacked the BJP for being “vengeful and petty”.

Terming the summons to its leader Abhishek Banerjee in connection with an alleged coal pilferage scam as “vendetta politics”, the Trinamool Congress on Tuesday claimed the move came following the ruling party’s recent mega rally, which left the BJP “ruffled”.

“Our party supremo Mamata Banerjee had this apprehension that central agencies might send notices to party leaders, following the successful meeting of the Chatra Parishad (students’ wing). Today, they have summoned Abhishek. This proves that BJP is pursuing vendetta politics,” senior TMC leader Sougata Roy said.

Earlier in the day, the ED issued a summons to TMC national general secretary Abhishek Banerjee for questioning in connection with its probe into the ‘coal pilferage scam’.

The central agency has asked Banerjee, the nephew of West Bengal Chief Minister Mamata Banerjee, to be present at its Kolkata office on Friday morning.

Roy also wondered why BJP leaders who are named in the Saradha and Rose Valley scams are not summoned by the central agencies.

“These probe agencies are functioning arbitrarily. The ED and CBI are the biggest allies of the BJP. The saffron party cannot fight us politically and are, therefore, using the agencies to counter us,” he alleged.

Later, the TMC, in a series of tweets, attacked the BJP for being “vengeful and petty”.

“Astounding how the @dir_ed is always BJP-fied! Mr PM, we’re wondering what makes you SO VENGEFUL, SO PETTY? Unable to accept the love that people have for the entire Trinamool Congress family, you send ED after our leaders, as soon as BENGAL REJECTS YOU. Give it up already!” it said.

“After every successful show of AITC’s organisational strength, @BJP4India gets rattled into action. Our leaders are being summoned by the @dir_ed yet again. This shameful attempt to cow us down will not work! Our integrity will shine through your slander!” the TMC said in another tweet.

The chief minister had Monday slammed the opposition, especially the BJP, for “unleashing a malicious campaign” against her and other TMC members, following the arrest of senior leaders Partha Chatterjee and Anubrata Mondal by central agencies in different cases.

The BJP, meanwhile, termed the TMC allegations as baseless, contending that those involved in wrongdoing will not be spared.

“If they are innocent, then they will come clean. If anyone has committed any wrong, then the law will take its own course,” BJP leader Rahul Sinha said.