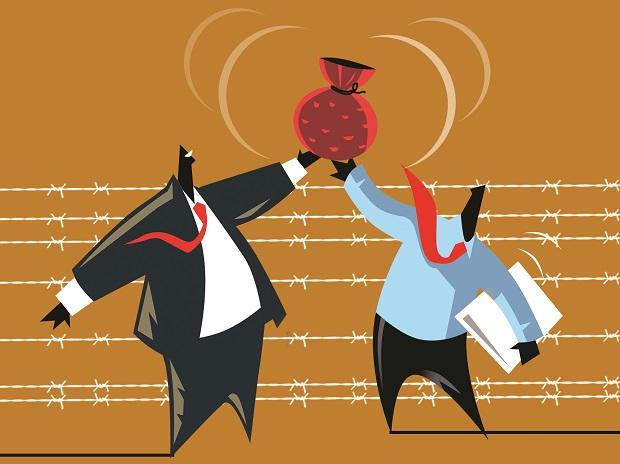 The number of ultra-high networth individuals (UHNWIs) – those with $30 million or more – is likely to rise 63 per cent in India in the next five years to 11,198 in 2025, predicts the Knight Frank Wealth Report 2021. The pace of growth back home is far higher as compared to the 27 per cent rise in their population globally at 663,483 during this period.


The billionaires club in India, according to Knight Frank, is expected to increase significantly by 43 per cent to 162 by 2025 from the current 113 in 2020. The growth has outpaced global average growth of 24 per cent and Asia average of 38 per cent during this period.


In the regional context, Asia is likely to see the highest rise in the number of UHNWIs with the estimated growth of 39 per cent. Among countries, this growth will be by Indonesia (67 per cent) and India (63 per cent).


“By 2025, Asia will host 24 per cent of all UHNWIs, up from 17 per cent a decade earlier. The region is already home to more billionaires than any other (36 per cent of the global total). China is the key to this phenomenon with 246 per cent forecast growth in UHNWI residents in the decade to 2025,” said Liam Bailey, global head of research at Knight Frank.


However, this level of affluence is not easy to achieve. To get counted among the world’s A-listers and among the top 1 per cent in selected countries, one needs to have really deep pockets. In Monaco, which has the world’s densest population of the super-rich, the entry point for the principality’s branch of the 1 per cent club is $7.9 million, followed by Switzerland, where $5.1 million can give one access to the 1 per cent club, Knight Frank said.


In the Asia region, Singapore has the highest entry threshold with $2.9 million needed to join this elite top 1 per cent club. The entry point for India in the 1 per cent wealthy club is $60,000, the report suggests. 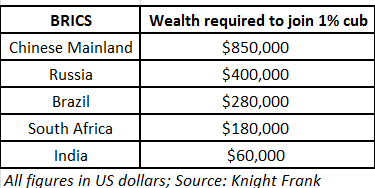 
Despite the ongoing pandemic, 91 per cent of Indian UHNWIs expect their wealth to increase in 2021. The growth of ultra-wealthy population in India, according to Knight Frank, is faster compared to the global average of 27 per cent and Asia average of 39 per cent. 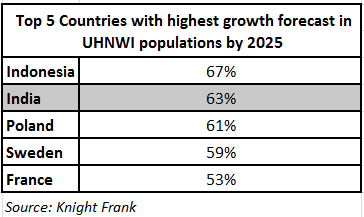