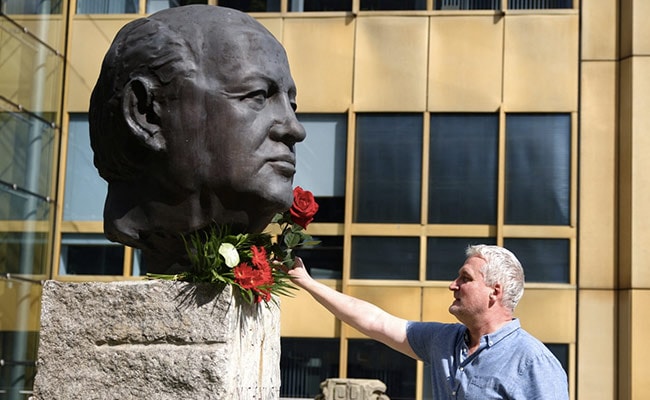 Some saw Putin’s no-show as a calculated snub from a former KGB officer.

Thousands of Russians filed past the open casket of Mikhail Gorbachev, the last leader of the Soviet Union, on Saturday with many saying they wanted to honour his memory as “a peacemaker” who dismantled totalitarianism and gave them their freedom.

Mikhail Gorbachev, leader of the Soviet Union from 1985-1991, died on Tuesday aged 91. His body lay in state in the grand Hall of Columns in central Moscow in the tradition of previous Soviet leaders, including Vladimir Lenin and Josef Stalin.

Flanked by an honour guard of two rifle-wielding members of the elite Kremlin Regiment with the hall’s 54 chandeliers emitting only a dim glow, the former president’s body lay in an open casket with his face and upper body visible. His daughter Irina and her two daughters sat nearby with close family friends.

Russians of all ages filed through the hall and laid flowers on a plinth at the foot of the casket and stole a brief and final glance as sombre music played and a giant black and white portrait of Gorbachev on the wall looked down. 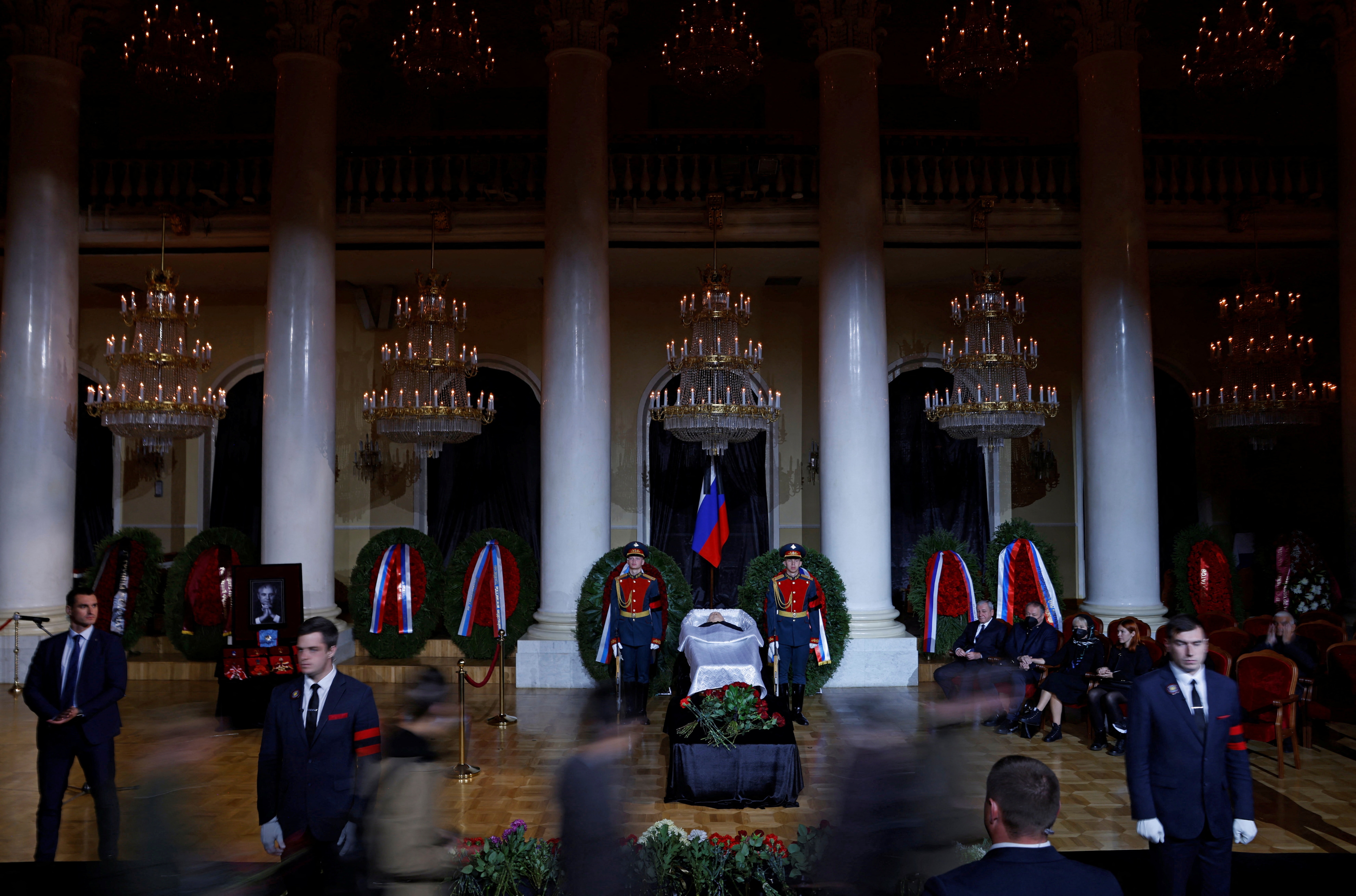 Honour guards stand by the coffin of Mikhail Gorbachev, the last leader of the Soviet Union

Best known in the West for helping end the Cold War, reducing his country’s nuclear stockpile, and for unwittingly presiding over the demise of the Soviet Union, Gorbachev’s legacy still divides opinion inside and outside Russia.

But those who took the trouble to line up to say farewell on Saturday recalled the late politician, who died in Moscow after an unspecified illness, with affection and gratitude.

“He was a peacemaker, he was one of God’s sons,” said Tatiana, 80, who said she had come despite poor health.

“He wanted to give us democracy and freedom and we turned out to not be very ready yet,” said Alexander Lebedev, a tycoon and close friend who once bankrolled an opposition-leaning newspaper with Gorbachev.

“That’s most unfortunate but we will still be a European country. This part of history will be over one day.”

Gorbachev, who won the Nobel Peace Prize in 1990 for his role in ending the Cold War, will be buried later on Saturday at Moscow’s famous Novodevichy cemetery alongside his wife Raisa, who died in 1999.

President Vladimir Putin briefly paid his respects to Gorbachev on Thursday at the hospital where he died, but stayed away from Saturday’s memorial event with the Kremlin citing his busy schedule.

Nor was Gorbachev granted a full state funeral unlike his nemesis Boris Yeltsin, Russia’s first post-Soviet president and the man who named Putin as his successor, who died in 2007.

Some saw Putin’s no-show as a calculated snub from a former KGB officer who has rolled back many of Gorbachev’s reforms and has said he regards the 1991 collapse of the Soviet Union as the greatest geopolitical catastrophe of the 20th century that he would reverse if given a chance.

“I think it’s a kind of a statement,” Vladimir Pozner, a veteran journalist, told Reuters. 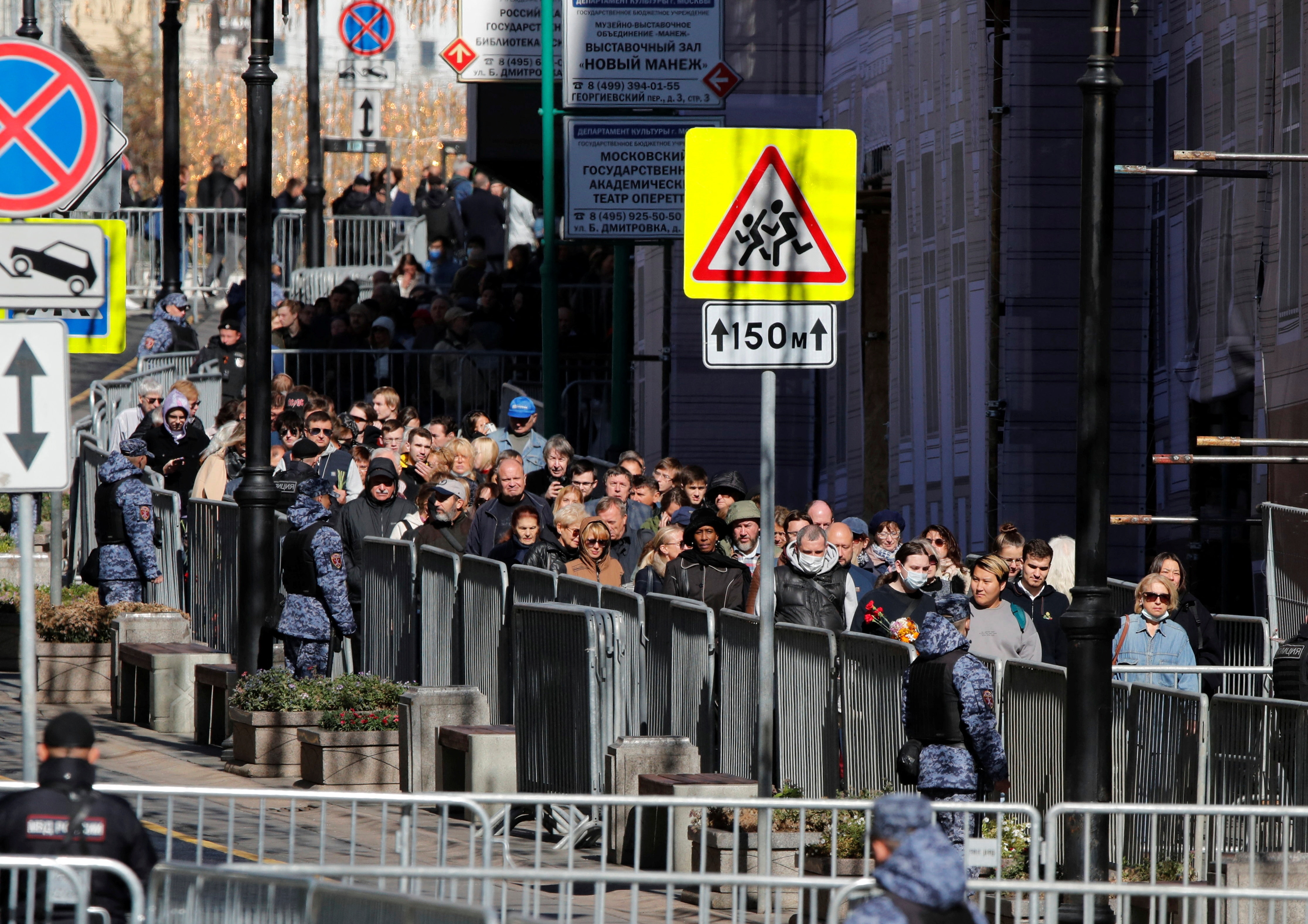 “And I don’t think that Mr Putin is a particular fan of Mr Gorbachev. That’s his right, he doesn’t have to be. I think they saw the world very differently.”

Gorbachev was, like Putin, crushed by the demise of the Soviet Union but is blamed by many Russians for setting in motion a reform process that spun out of control and emboldened many of the USSR’s 15 republics to break away.

That ushered in a period of new found freedoms in Russia but also prolonged economic suffering and a sometimes bloody and one-sided redistribution of state property which left many Russians feeling angry and humiliated.

Former Russian President Dmitry Medvedev, now deputy chairman of the Security Council, paid his respects to Gorbachev on Saturday, as did some other, but not all, senior pro-Kremlin politicians.

Hungarian Prime Minister Viktor Orban laid flowers and was expected to attend the funeral too. But with Russia heavily sanctioned by the West over what Putin calls his “special military operation” in Ukraine, other European and Western leaders were absent.

Among the mourners were many young Russians who were not even born when the Soviet Union collapsed. Roses are placed on a sculpture of Mikhail Gorbachev

“Yes he made some serious socio-economic mistakes, but all that pales in comparison with what he did for the freedom of the press and for international relations. Stuff like the fall of the Berlin Wall,” said Oleg, 22, a former history student.

Andrey Zubov, an historian who knew Gorbachev, said the attendance of young people was a silent protest against the current political system.

But he said he was disappointed by the turnout given Gorbachev’s role in modern Russian history, suggesting it showed how few Russians valued freedom over tyranny.

“When Stalin lay in state here (in 1953) hundreds of thousands came and some people were killed in the crush,” said Zubov.

“But when Gorbachev died, thousands of people have come to honour a person who gave us our freedom. It’s not a lot.”