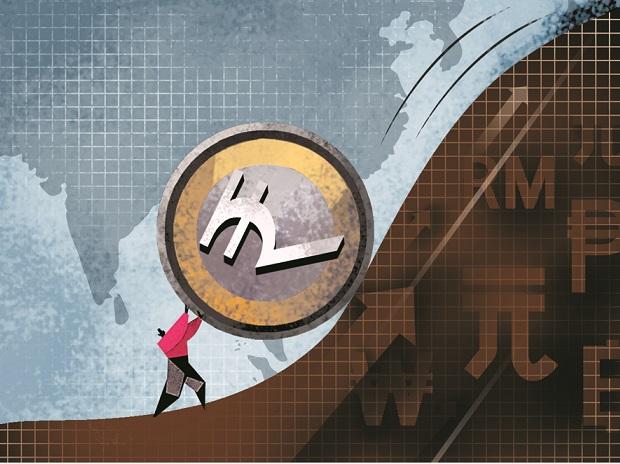 The Indian rupee fell sharply on Friday following cues from the equity markets, even as the bond yields rose shadowing US yields.

The rupee was the worst performer in Asia, followed by South Korean won, which lost 1.39 per cent. Almost all major currencies fell against the dollar on Friday.


The dollar index, which measure’s the greenback’s strength against major currencies, strengthened 0.50 per cent overnight to 90.59.


The weak rupee level, which is expected to continue for a while, however, works in favour of the RBI, which for some time has tried to keep the currency weak by accumulating reserves. Since March 2020, the apex bank has accumulated more than $100 billion of reserves, which prevented the rupee from becoming strong. A weak rupee helps in India’s export. The RBI did it even at the risk of being termed a currency manipulator by the US Treasury.


RBI governor, on Thursday said its reserves accumulation is to prevent undue volatility as witnessed during the taper tantrum of 2013.


“RBI’s responsibility is to ensure that there is stability of the exchange rate, and our focus is always to prevent undue volatility, so that the exporters, or even the importers and other businesses, can make informed decisions,” said the RBI governor.


The US 5-year yield, at nearly 1.5 per cent, is at its highest level since March 2020. The 2-year bond yields also spiked 6 basis points in a couple of sessions.


According to IFA Global, “rising short-term US yields are a definite sign of caution for short dollar positions.”


Another reason why the domestic bond yields spiked on Friday is because the RBI devolved its five-year bonds, even as it employed the uniform price-based auction. RBI generally employs the multiple price auction method, but for the 5-year bond, it used the uniform price auction as an experiment. However, out of Rs 11,000 crore of bonds on offer, the primary dealers had to buy Rs 2,131.61 crore of bonds. Another bond maturing in 2023 had to be devolved to primary dealers too. Out of Rs 4,000 crore on offer, the primary dealers bought nearly Rs 2655 crore.


Importantly, the central bank did not sell half of its Rs 5,000 crore offering on the bond maturing in 2050.


The devolvements indicate that the central bank is not ready to accept high yields, but the market participants say unless the RBI announces open market operations to purchase bonds, the yields will continue to rise.


“RBI’s efforts, including the governor’s appeal for an orderly evolution of the yield curve, should be interpreted as the central bank intervening to address the pace of change rather than control the direction of yields,” said Suyash Choudhary, head of fixed income at IDFC Mutual Fund.