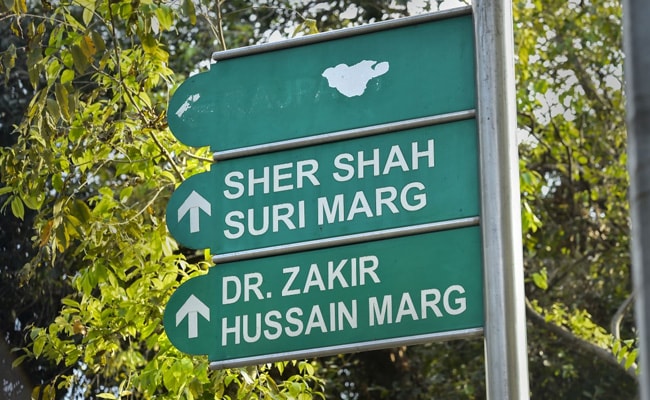 Rajpath written on one of the signages was scrapped near India Gate.

The old name of New Delhi’s ceremonial boulevard — Rajpath — has been scraped off the signages mounted around the periphery of the India Gate hexagon, after its rechristening to ‘Kartavya Path’.

The move comes after the area’s civic body recently issued a notice approving the renaming of the historic road at its special meeting on September 7.

Late Friday night, one of the signages with three green plates bore name of two streets — Sher Shah Suri Marg and Dr Zakir Hussain Marg — while ‘Rajpath’ inscribed earlier in the top plate could be seen scraped off, as also from other signages that bore the old name.

Sources in the New Delhi Municipal Council (NDMC) said the erasure of ‘Rajpath’ from signages were being taken up by authorities working on the redevelopment project after the official nod to the rechristening. It will be replaced with ‘Kartavya Path’.

New, big signages bearing the new nomenclature of the ceremonial boulevard have been put up on the streetsides. Many youths were seen taking selfies with new signages bearing ‘Kartavya Path’ on a wide shining green board erected on the erstwhile Rajpath.

“These new green boards bearing ‘Kartavya Path’ (in four languages) on the old Rajpath have been installed by Central Vista project authorities in line with a theme,” an official said.

Similar thematic signages bearing ‘C-Hexagon’ have also been installed around its periphery.

Union Minister of State for External Affairs and Culture Meenakshi Lekhi, who is also a member of the NDMC, had on September 7 said: “However, after 75 years of independence, it is felt that the name of Rajpath needs to be changed, in tune with the values and principles of democracy and a contemporary, new India. The Kartavya Path will also inspire everyone who visit or cross the road to perform their duties towards the country, the society and their families,” she said.

Prime Minister Narendra Modi had inaugurated the ‘Kartavya Path’ on September 8 and it was thrown open to the public from September 9. He had urged people to take selfies with it and upload it on social media.

In his address after the inauguration, he said Kingsway or Rajpath, a “symbol of slavery”, has now been consigned to history and has been erased forever.