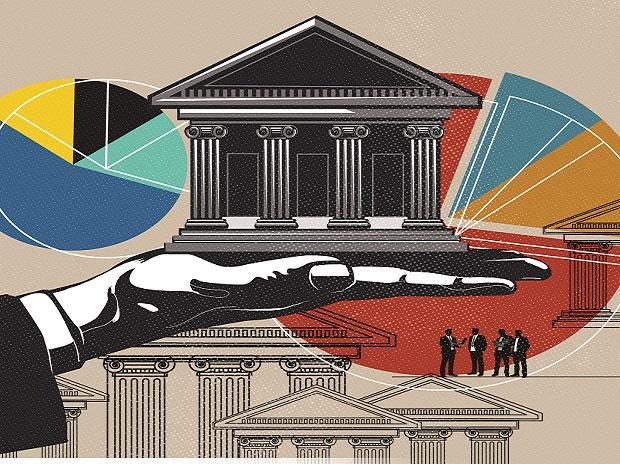 Private bank stocks such as Axis Bank and IndusInd Bank were ruling the bourses on Thursday, a day after Finance Minister Nirmala Sitharaman announced lifting of embargo on private banks against participation in government business.


At 11:00 am, Axis Bank was quoting 4.2 per cent higher at Rs 781 on the National Stock Exchange (NSE), and was the second best performing stock on the index. Closely behind it was IndusInd Bank with a 4 per cent gain, at Rs 1,115. In comparison, the frontline Nifty50 was trading 1 per cent higher while the Nifty Private Bank index was up 1.6 per cent.

Federal Bank, City Union Bank, Bandhan Bank, IDFC First Bank, RBL Bank, and HDFC Bank, meanwhile, were up in the range of 0.8 per cent and 3 per cent. ICICI Bank was the only scrip that was rading in the red, down 0.2 per cent, on the NSE.


On Wednesday, FM Sitharaman said that all private banks are now allowed to participate in government businesses, breaking away from the current practice where the business operations linked to the government were forte of public sector lenders.


“Private banks can now be equal partners in development of the Indian economy, furthering government’s social sector initiatives, and enhancing customer convenience,” she said in her sttement.


It must be noted that some large private banks, unlike mid-sized banks, were allowed to participate in the government’s businesses even after the RBI restricted the private lenders’ participation in 2012.


Here’s how brokerages interpret the move:


Lifting of restrictions on private banks’ participation in government business is a positive developemnt for the sector as it will improve their share of fees/deposits over the medium-term. Private lenders are leaders in technology and innovative solutions. Moreover, they have significantly increased their geographical advantage as well as product capabilities which can help them win significant business.


“This could include various government-related banking businesses such as taxes and other revenue payment facilities, pension payments, small saving schemes, etc. That said, we await final guidelines around the proposal as well as operational details/limitations, if any, around the execution,” the brokerage said in its report.


The scheme would be positive for all the large private banks, especially with the top three banks (Axis Bank, HDFC Bank and ICICI Bank) already having some presence in this business. We would want to believe that this could also help a few regional banks like Federal Bank or Bandhan Bank who have strong liability franchise in their core markets. That apart, we do believe that the strong public sector banks such as State Bank of India would be able to defend their market share, which is reflected in their share of fees and growth rates in recent years


While the brokerage noted that the development would open another new stream of business for private banks, it is not too sure if the opportunity is available immediately for the private banks. Besides, it also highlights that public banks will now have to step up measures to defend their source of business.


Adding a bank to the government payment system is likely to be time-consuming and requires continuous interaction with the government, and fee income streams have a higher probability of declining in the event of higher competition. This, the brokerage said, could be among the issues that the government would have to address before implementation of the proposal. However, it remains to be seen if the float income would offset any pressure that is likely to come on account of lower fee margins, it added.


Private banks have been at the forefront in terms of providing cutting-edge technology. Thus, this step is likely to enhance customer convenience, provide healthy competition, and result in higher efficiency in customer services. It would further enable the Banking sector to serve customers more expeditiously.


“Overall, we believe this step to be a positive for private banks as the lifting of these restrictions would provide them access to a greater transactional pool, adding to their fee income profile – we foresee some opportunities on the lending/deposit side as well,” it said.