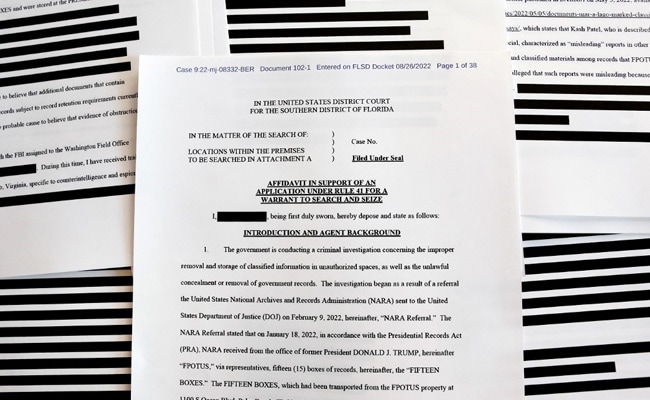 The Department of Justice filing against Donald Trump was stark, saying someone at his Mar-a-Lago club may have tried to conceal or remove classified documents before an FBI search this month, constituting potential obstruction of justice.
It was a damaging accusation against the former president, revealed in a late Tuesday court filing.

But the photo included in the filing spoke even louder.

“TOP SECRET/SCI” blazed out on cover sheets for at least five sets of papers haphazardly laid out on the carpeting. Another cover sheet at the fore of the government photo said “SECRET/SCI” and “Contains sensitive compartmented information” — a marking for documents that include references to source and methods, which intelligence agencies go to great lengths to protect.

For supporters and critics of the former president, it was the first time the sensitive national security papers at the center of the latest controversy were visible, even if their contents remained classified.

Altogether, they are the types of documents normally found in highly secure facilities known in the intelligence trade as SCIFs. And they are the sort of paperwork the government argued Trump had no right or authority to take with him when his presidency ended.

The photo — which was part of the Justice Department’s response to Trump’s demands to have the documents reviewed by a special master — may further undercut enthusiasm among some key supporters to defend the former president’s actions. Normally stalwart backers have stayed quiet or tried to deflect criticism after initially protesting the FBI search as an overreach by DOJ.

Trump has denied wrongdoing but offered no credible explanation for why he had the documents or didn’t return them earlier, as his lawyers claimed. Some of his supporters have suggested without offering any proof that the FBI somehow planted evidence at Trump’s club.

In the Justice Department photo, the documents were strewn out alongside letters or memos with White House letterhead that appeared redacted by government investigators, as well as a bankers box containing a framed copy of the cover of Time magazine’s March 4, 2019 issue, featuring Trump in the Oval Office and a slew of potential Democratic rivals looking in through the window.

One of those rivals, Joe Biden, now has Trump’s seat in the office. It’s the former president who is now on the outside, with supporters wondering if the latest controversy means he’ll never get back in.