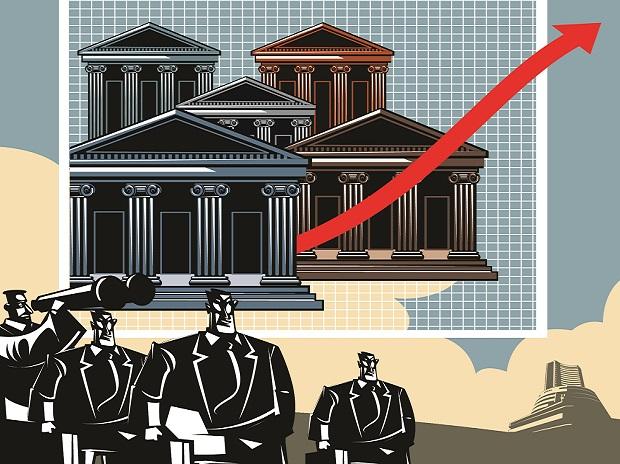 Banking and financial services’ shares propelled markets to new record highs on Monday as index heavyweights such as ICICI Bank, and HDFC hit new peaks. The Nifty Bank index, which was the top performing index on the National Stock Exchange (NSE), jumped nearly 730 points, or 2 per cent, in the intra-day deals to hit a new 36,837 levels.


Among individual stocks, IndusInd Bank advanced 3.3 per cent at the bourses to hit a high of Rs 1,061 apiece on the NSE while Axis Bank gained 3 per cent to hit a fresh 52-week high of Rs 773 per share. ICICI Bank and HDFC rallied around 2 per cent each to hit fresh record peaks of Rs 664 and Rs 2,854.6 per share, respectively.

RBL Bank, HDFC Bank, Federal Bank, State Bank of India, Punjab National Bank, and Bank of Baroda were all up between 1 per cent and 2.4 per cent on the NSE at 9:55 am, as against a 0.85 per cent gain in the benchmark Nifty50 index. The sectoral Nifty Bank index was up 1.7 per cent.


The banking and the financial services sector has positively surprised the Street for two consecutive quarters. Analysts note that stress recognition (in the form of pro-forma slippages of


2-5 per cent) and invoked restructuring (at less than 1 per cent) well within or below the guided range; contained credit cost being much lower than anticipated; robust CASA accretion, sharp decline in deposit cost and release of liquidity buffer, all lead to earnings upgrade and stable-to-improving interest margin profile of banks in Q3FY21.


“Q3FY21 earnings came as a reassurance that stress is managed well for Axis Bank, State Bank of India, HDFC Bank and Federal Bank. Also, sustainability of operating profit profile for these banks with new normal credit cost trajectory will drive re-rating for these names,” said a note by ICICI Securities dated February 14.


While Axis Bank reported a 36 per cent on year drop in Q3FY21 net profit at Rs 1,117 crore, its net interest income (NII) for the quarter rose 14 per cent to Rs 7,373 crore from Rs 6,453 crore in the year-ago quarter. The bank said that specific loan loss provisions for the December quarter stood at Rs 1,053 crore compared with Rs 2,962 crore in the December quarter of last year.


State Bank of India (SBI), too, arrested a fall in net profit on the back of lower provisioning and improved asset quality. The lender’s PAT declined only 6.9 per cent YoY to Rs 5,196.22 crore for quarter ending December, 2020 as against Street expectations of up to 58 per cent erosion.


As regards the economic recovery, analysts at Morgan Stanley said that high-frequency indicators in India have stayed strong, with on-going growth momentum likely to continue. “Stocks have done well over the past three months and are likely pricing in some growth recovery,” the analysts noted in their recent report.


Who will drive the next leg of rally?


According to Japan-based brokerage firm Nomura, the outperformance, since March 2020 lows, is dominated by Indusind Bank (110 per cent outperformance over the Nifty index), Axis Bank (40 per cent) and ICICI Bank (23 per cent).


“Post the recent strong rally, the implied medium-term growth obligation reflected in valuations have now reached historical levels. As a result, valuation multiples for large-cap banks are pricing in a normalized medium-term growth. However, consensus forecasts for mid-cap banks still suggest decent headroom for re-rating,” the firm said in a report dated February 9.


In their coverage, they prefer Axis, ICICI, IndusInd and State Bank of India on the merits of a recovering economy. That apart, they also have buy rating on HDFC Bank.


The brokerage has raised price targets to factor in 10-15 per cent above-mean valuations at HDFC Bank and Axis Bank. Meanwhile, ICICI’s valuation, they say, is well above mean levels given significantly higher profitability compared to history.


“A combination of valuation re-rating and strong earnings compounding drives 30-40 per cent upside for the group. Our top picks are ICICI, HDFC Bank and Axis. IndusInd should also benefit from the cyclical tailwinds,” it said.