Nokia is one of the last few brands that are still selling smartphones based on Android One platform in India. For the uninitiated, Android One is a family of Android smartphones powered by stock versions of Android with a focus on Google services. That said, the Nokia smartphones often come with an up-to-date Android operating system that has advertisement-free vanilla user interface and no pre-installed bloatware.


The Nokia 5.4, a new midrange smartphone from Finnish technology start-up HMD Global, which owns the Nokia brand, is banking on the Android One and select creator-centric imaging features. Priced Rs 13,999 onwards, the smartphone, however, seems to lag peers in price-to-specifications ratio. But how does it work out in real-life usage? Let’s find out:


The Nokia 5.4 has a striking design, with Nordic colour-themed (polar night – review unit) curved back cover. Made of plastic, the back cover has a glossy gradient profile. It looks good but easily gets smudges and fingerprint marks, and is prone to scratches. Thankfully, the phone comes with a transparent TPU cover, which makes the phone look bulky but protects the back cover from unwanted smudges, fingerprint marks and scratches. Speaking of size, the phone is neither big nor small. It has comfortable ergonomics with lightweight build for ease of use. The phone has a camera bump on the back but it does not protrude much from the frame. Therefore, the camera bump mixes well with the phone’s design language and looks like a part of the overall package. Besides the camera module, the phone’s rear side houses a capacitive fingerprint sensor, which is quick to unlock the phone and works better compared to in-screen fingerprint sensors that are common in other midrange phones.


Like the back, the phone’s frame is made of plastic. It is sturdy and contributes to the phone’s lightweight design. The frame is thick but has a uniform size, which aids the phone’s in-hand feel. The frame features the power button and volume rocker buttons on the right side, Google Assistant button on the left, a 3.5mm audio out port and secondary microphone on the top, and USB-C, primary microphone and speaker at the bottom. 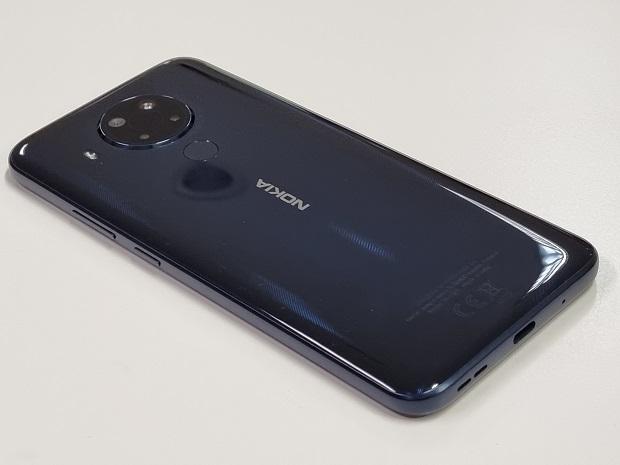 On the front, the phone sports a 6.39-inch punch-hole screen of an HD+ resolution and 60Hz refresh rate. While screens of 60Hz refresh rate are common in this segment, HD+ resolution is a dampener – both on paper and real life. The screen looks pixelated and lacks the contrast. Moreover, the peak brightness levels are abysmal, resulting in troubled sunlight legibility. Though decent for regular usage, the screen fails to impress while playing multimedia content.


The Nokia 5.4 sports a quad-camera array on the back, featuring a 48-megapixel primary sensor, a 5MP ultra-wide-angle sensor, a 2MP depth sensor, and a 2MP macro sensor. On the front, the phone has a 16MP sensor. Despite featuring segment-first imaging features like Nokia OZO spatial audio, cinema mode, and support for H-Log format video recording, the Nokia 5.4 camera performance is nothing to write home about. The phone’s primary sensor is good but its strength is limited to use in daylight conditions. The ultra-wide-angle sensor is mediocre at best; it struggles to capture details, natural colours and dynamic range. Similarly, the macro sensor is a dull performer irrespective of light conditions. As for the front camera, it is good for selfies and video calls, but not good enough to match the performance of its peers. Coming to the segment-first imaging features, the only saving grace here is the OZO spatial audio. The Nokia 5.4 might not be a good smartphone to record videos but it records audio in surprisingly good quality. That said, the other imaging features like cinema mode and H-Log format video recording look like a great deal on paper but mediocre camera sensors fail to justify the features’ real worth.


Powering the Nokia 5.4 is a Qualcomm Snapdragon 662 system-on-chip, paired with up to 6 GB of RAM and 128 GB of internal storage. Being an Android One smartphone, it is expected to be powered by the Android 11 operating system. Unfortunately, the phone ships with Android 10. It, however, is touted to get Android 11 soon. Nevertheless, the user interface is clean and free from bloatware and advertisements. As for performance, the phone handles regular operations with ease. But note that this phone is not for power users.


The Nokia 5.4 is powered by a 4,000 mAh battery, which is good enough for a day of on-battery time. Unfortunately, the phone comes with a 10W charger which takes more than two hours to charge the phone’s completely drained-out battery.


The Nokia 5.4 would have been a good smartphone in the sub-Rs 10,000 price segment. At Rs 13,999 for the base model, the Nokia 5.4 is not just expensive but lacks the zing due to its mediocre cameras and sub-par performance. Consider the Nokia 5.4 for its striking design and clutter-free stock Android user interface. Beyond these, there is not much to like about in the Nokia 5.4.