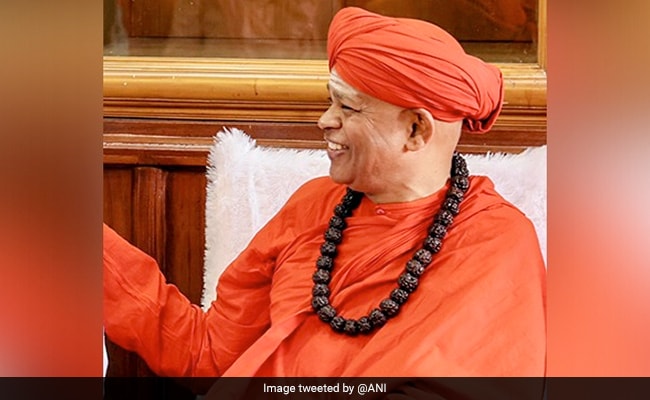 An anticipatory bail plea moved by the seer was adjourned for today by a local court.

Chief pontiff of Murugha Math Shivamurthy Murugha Sharanaru, who has been arrested for alleged sexual abuse of high school girls and sent to judicial custody, was taken to the district hospital in Chitradurga on Friday after developing some health complications in jail, police sources said.

Police sources said the seer was questioned for several hours after his arrest late on Thursday night. He reportedly developed some health complication soon after he was sent to jail. Accordingly, he was taken to the district hospital for check-up.

Soon after his arrest, Sharanaru, who has been booked under provisions of the Protection of Children from Sexual Offences (POCSO) Act and the SC/ST (Prevention of Atrocities) Act for sexually abusing two high school girls, was produced before a local court, which remanded him to 14 days’ judicial custody, Chitradurga Superintendent of Police K Parashuram told reporters.

“After the order, he was taken to the hospital for medical examination and later sent to the jail,” he said.

The pontiff of one of the most prominent and influential Lingayat seminaries in the state was questioned at an undisclosed location by Deputy Superintendent of Police Anil Kumar, the investigation officer in the case.

He was later taken to the district hospital for a medical checkup, and subsequently produced before the first additional district and sessions judge at her residence.

The judge remanded the seer to 14 days’ judicial custody, following which he was sent to the district prison, the Chitradurga SP said.

Along with the pontiff of Murugha Math, four others have been booked with one person working at the ‘Santvana Kendra’ (counselling centre by the Directorate of Women and Child Development Department), while another one has been arrested. Two others are still at large for whom a search is on, police sources said.

Parashuram said the police would apply for his police custody for more questioning.

A group of advocates had on Thursday wrote to the Registrar General of the Karnataka High Court claiming that the investigation against the accused seer “is not being carried out in an unbiased, free and fair manner.” “He (the seer) has not even been summoned for investigation or his medical examination conducted. These lacunas in the investigation show that there is already prejudice caused on part of the investigation,” the letter claimed.

It is alleged that the two girls, aged 15 and 16, studying in a school run by the math and residing in a hostel, also belonged to the monastery, were sexually abused.

Apart from the POCSO Act and the SC/ST Act, cases have also been booked under various sections of the Indian Penal Code (IPC) against the seer.

In their letter, the group of advocates called for immediate intervention of the high court in monitoring the ongoing inquiry of the case in the interest of justice, so as to ensure fair and free investigations.

“The accused herein being an influential person not even being summoned by the investigating officer, let alone being arrested is utterly shocking,” advocates Siddharth Bhupathi, Shreeram T Nayak, Ganesh Prasad B S, Ganesh V and Ponnanna K A said in the letter.

Besides, the anticipatory bail plea moved by the seer was adjourned for today by a local court.