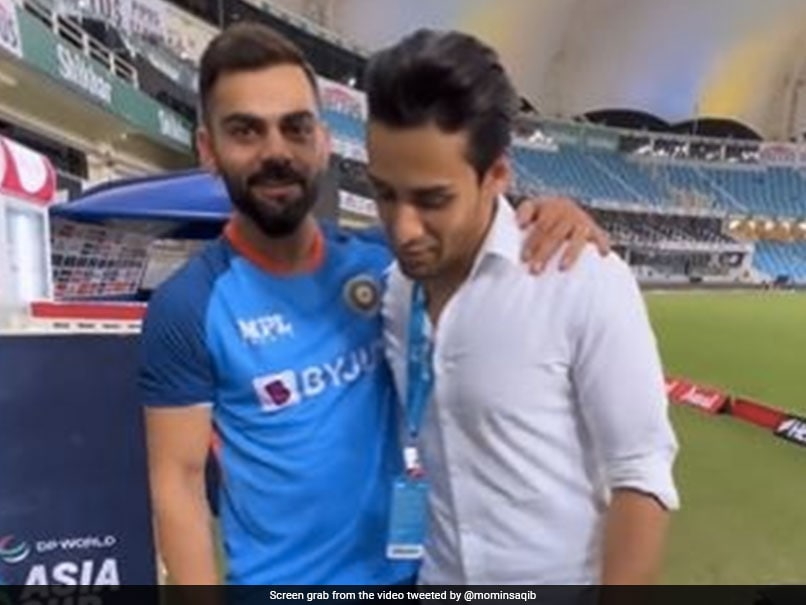 The India-Pakistan Asia Cup encounter on Sunday offered a perfect nail-biter to the fans as the match went down to the wire. The last-over thriller eventually saw India winning the game by five wickets but not before both the sides enjoyed a pure roller-coaster ride during the game. The fans were kept at the edge of their seats, until Hardik Pandya hit a six to seal the match for India with six runs needed to win off the last 3 balls.

What added more flavour to the India-Pakistan match was the friendly behaviour of the players of both the sides with each other and their fans. While Hardik Pandya hugged Pakistan wicketkeeper Mohammad Rizwan during the game, Virat Kohli started the contest by greeting former international pacer Wasim Akram.

Another video of Kohli is going viral on social media in which the Indian batter meets Momin Saqib, a Pakistani influencer, who rose to fame post his “Maaro mujhe maaro” statement that became a viral meme. Notably, Saqib had expressed his disappointment after India had defeated Pakistan by 89 runs (DLS method) in group stage of 2019 ODI World Cup.

A great sportsman and a humble personality. The one and only @imVkohli Good to see him back in form!

What a game tonight!

Talking about the match, Hardik Pandya produced a special all-round effort as India held nerves to pull off an exciting five-wicket win over arch-rivals Pakistan in their Asia Cup opener in Dubai on Sunday. Hardik (3/25 in 4 overs) showed his high value under extreme pressure as his well-directed short balls alongside Bhuvneshwar’s 4 for 25 helped India bowl out Pakistan for 147.

It should have been straight forward chase but India’s experienced top-three faltered, putting extra pressure on the middle order. Hardik (33 not out off 17) and Ravindra Jadeja (35 off 29) then shared a 52-run stand to take India on the cusp of of a famous win. The star all-rounder’s three fours off Haris Rauf off the 19th over effectively sealed the game for India.