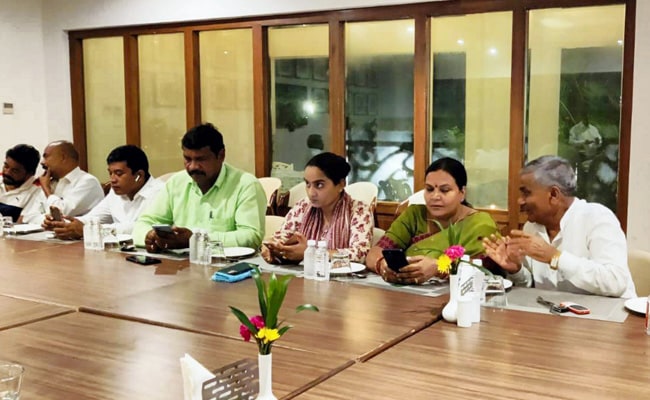 31 MLAs and ministers of the ruling coalition in Jharkhand are in Raipur. (File)

Senior BJP leader Nishikant Dubey hit out against the Hemant Soren-led Jharkhand government and called it “Alibaba aur Chalis Chor” amid the political crisis arising due to the speculations over the disqualification of Chief Minister Hemant Soren for allegedly awarding a mining lease to himself.

The senior MP from Godda called the Jharkhand government a government of “thieves” and said that “Hemant Soren is Alibaba and his supporters are 40 thieves (Chalis Chor).“

The United Progressive Alliance (UPA) MLAs of Jharkhand on Thursday urged Governor Ramesh Bais to “clear the air” on the speculation concerning the “opinion received from the Election Commission” by his office “to disqualify” Chief Minister Hemant Soren as an MLA for alleged violation of electoral norms.

Nishikant Dubey said that neither the Governor nor the Election Commission has sent a letter for Mr Soren’s disqualification but he is running with his MLAs due to fear of losing the Chief Ministership.

The BJP leader asserted that if Hemant Soren is honest he should not fear the CBI or the ED and even challenged JMM leader for mid-term polls.

“If someone is constantly talking about the fear of Central Bureau of Investigation (CBI) and Enforcement Directorate (ED) cases, then he is surely a thief. Because an honest man need not fear any of the two. But Hemant Soren is scared and is continuously running with his MLAs. Our fight is for the public and we challenge Hemant Soren for mid-term polls,” the BJP leader said.

“Regarding his disqualification, neither have we received any letter from the Governor nor from the Election Commission (EC). If he is accusing BJP, I want to ask him what did we do? Did we flee the Maha Dalit in Palamu? Did we burn the dumka girl? Did we get the tribal girl in Ranchi raped? All these incidents have happened due to his administration only,” the senior BJP MP said.

Earlier on Friday, Chief Minister Bhupesh Baghel had accused the BJP of using various tactics to take away MLAs of other parties and attempting to topple an elected government in states.

Earlier on August 30, 31 MLAs and ministers of the ruling coalition in Jharkhand arrived in Chhattisgarh’s capital Raipur.

The legislators went to Raipur in an apparent effort by the Chief Minister to keep his flock together. The ruling coalition in Jharkhand includes JMM, Congress and RJD.

Sources said those who went to Raipur include 13 from Congress including four ministers and 18 MLAs of JMM. They said that ministers belonging to JMM did not go.