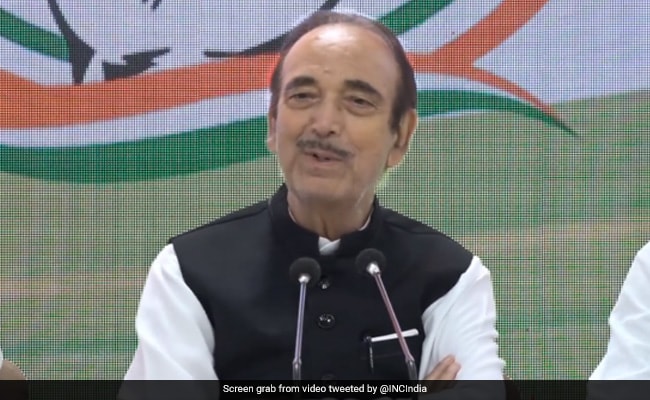 Ghulam Nabi Azad resigned from the Congress on August 26 with a scathing letter to Sonia Gandhi.

The Congress Tuesday questioned the timing of Ghulam Nabi Azad’s letter to party chief Sonia Gandhi attacking the leadership and asked why this “divine knowledge” did not dawn upon him before 2021 “when his seat and bungalow were safe”.

Now that Mr Azad’s Rajya Sabha seat and his Delhi bungalow are not safe, “divine knowledge has dawned upon him and he is writing five-page letters in British English”, Congress spokesperson Gourav Vallabh said.

“Whoever resigns from the party, writes five-page letters. Going by the English used in the letter, it seems some Britisher has written that. But the question is why did this divine knowledge not come to you before 2021? All answers lie in that,” he told reporters Asked about Mr Azad’s attacks on the Congress leadership while severing five-decade-long ties with the party, Mr Vallabh said, “The divine knowledge which was attained today, why was that not attained before 2021? Because before 2021 your seat was secure and your bungalow was safe.

“When there was a crisis on the seat and the bungalow, divine knowledge dawned on you and now you are writing big letters,” he said.

The Congress spokesperson said writing a letter is very easy for educated people but asked what is the meaning of that.

“Why was that letter not written before 2021? This question has the answer to all your questions. But keep in mind, whatever they do, there will be a historic rally on September 4 at Delhi’s Ramlila Maidan and questions will be asked about why GST was imposed on flour. We will not leave that,” he said.

To a question about Rahul Gandhi, Mr Vallabh said on September 4, the party is organising a “Halla Bol rally” against inflation and one would have to walk 25 km daily for 150 days from September 7 covering more than 3,500 km.

“For 150 days, Rahul Gandhi Ji will walk in the Bharat Jodo Yatra to connect the country. He will walk to raise the issues of the country. I have given his schedule of the next five months to Azad ‘Saheb’ through you,” he told reporters About the Congress president election, the party’s national spokesperson said the election schedule mentioning the dates for filing nomination, polling and counting has been announced.

“So, if anybody wants to contest, the dates are there. The Congress has a constitution and the entire timetable has been placed before you,” Mr Vallabh said.

In a fresh attack on the Congress, former leader Ghulam Nabi Azad Monday said the “ailing” party needs medicines which are being provided by compounders instead of doctors.

Days after quitting the party, he claimed its foundation has turned very weak and the organisation can fall anytime but the Congress leadership doesn’t have the time to set things right.

The former Congress leader also alleged that Rahul Gandhi does not have the aptitude or interest in politics.