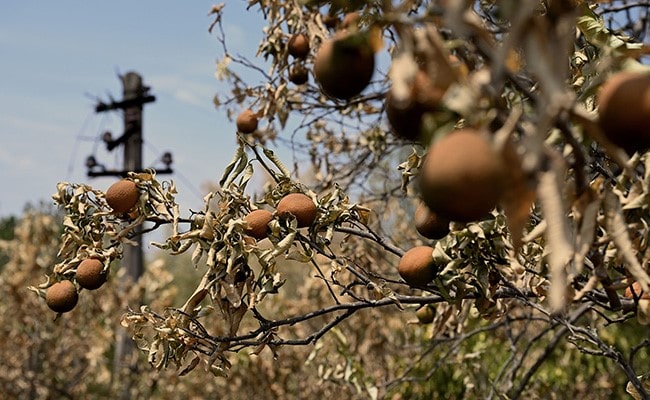 For almost a decade, farmer Qin Bin, 50, has toiled his plot, growing peaches and dragon fruits for sale to visiting tourists at his orchard on the outskirts of the Chinese megacity of Chongqing.

But this year’s crop is devastated, another casualty of a blistering heatwave that has engulfed southern China in the country’s hottest summer on record and subsumed half its land in drought.

“This is absolutely the first time in my life encountering such a disaster,” he tells AFP.

“This year is a very miserable one.

“We should be harvesting fruits right now, but it’s all gone, dead from the scorching sun.”

The searing heat poses a “severe threat” to the country’s autumn harvest, the Chinese government has said, promising billions of yuan in fresh aid to farmers.

But for Qin, any help will come too late — his crop has dried up on the vine and with it his main source of income.

“It’s basically all dead,” he says. “The government has been making a huge effort to help us, but it can only bring trees to life, not fruits.”

He’s far from the only one suffering in his village, home to over a thousand acres of longans that are now ruined.

“If you take a walk around our town, you can feel the scale of the disaster,” he says.

The extreme heat has forced Qin and fellow farmers to work odd hours — it’s simply too hot to toil during the day as the mercury pushes past 40 degrees Celsius (104 Fahrenheit).

Instead they work at night — from 10 pm until 4 am — and rest during the day.

“It’s impossible to work out in the orchard, because the ground temperature is around 60 degrees Celsius… we measured it the other day,” he explains.

But their efforts to save what they can may be in vain if the drought lasts into next month.

“If the heat lasts until September 4 as some of them said, probably more than half of the trees that we put day-and-night effort into rescuing will be dead,” Qin says.

“It’s too miserable to bear witness to.”

Qin is sceptical that much can be done to help his beleaguered community — with so much land affected, he says, authorities have a huge task on their hands.

“Those who can save themselves are doing it,” he says.

The effects of the drought will continue even into 2023, as his parched trees struggle to produce fruit.

“My trees won’t bloom well next season, the fruits will be greatly affected as a result.”

All they can do for now, he says, is wait for rain.