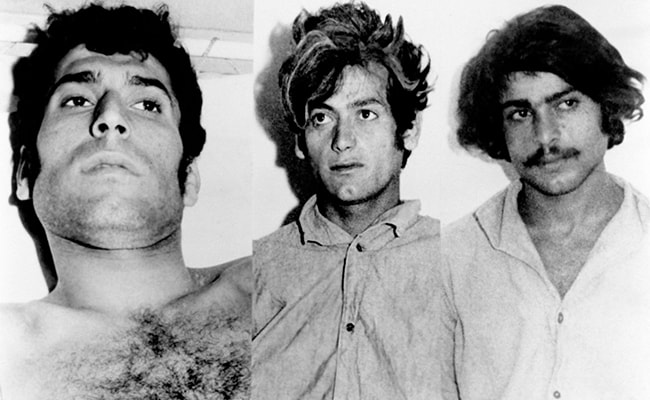 Three militants captured by German police at the Frstenfeldbruck Air Base in 1972.

Palestinian gunmen storm the Olympic Village at the Summer Games in Munich and take a group of Israeli athletes hostage, triggering a standoff that ends in a massacre.

AFP was the first news outlet to report on the tragic climax of the attack that shocked the world 50 years ago. Here’s a look at how it unfolded.

‘Games of Peace and Joy’

It is the 11th day of the Munich Olympic Games, dubbed the “Games of Peace and Joy” by organisers eager to erase memories of the 1936 Games in Berlin, presided over by Nazi leader Adolf Hitler.
At dawn, eight men wearing tracksuits and carrying sports holdalls scale the fence of the Olympic village enclosure and head for 31 Connollystrasse where the Israeli delegation is staying.

Those running into them think they are athletes returning from a night on the town.

Masked in black scarves and touting handguns, they burst into the Israelis’ apartments.

Two men who try to stop them are killed: wrestling coach Moshe Weinberg and weightlifter Yossef Romano. Some escape, but nine other Israelis are taken hostage, hands bound behind their backs.

“It was between 4 and 5 am… when I opened my door I saw in the stairwell a man in plain clothes wearing a cap and brandishing a machine gun,” a witness living in the same building as the Israelis, tells AFP.

“Shortly after 0700 GMT (8 am local time) nearly 3,000 police officers are deployed in and around the Olympic Village. Elite marksmen arrive and surround the building,” AFP reporters at the scene write. 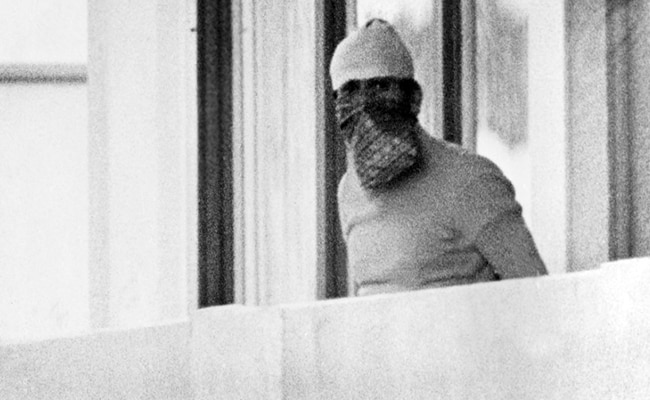 A member of Black September appears on the balcony of the building where Israel’s Olympic team is taken hostage. (File)

In the course of the morning, the operation is claimed by the radical Black September militant group, already notorious for the assassination of Jordanian Prime Minister Wasfi Tal and the hijacking of a Belgian airliner a few months before the Olympics.

In negotiations with the West German authorities they threaten to execute the hostages if their demands are not met.

Meanwhile, several thousand people congregate around the Olympic Village to wait for news of the hostages.

The competitions continue as normal from early morning. At 3:50 pm local time, authorities halt the Games for 34 hours — a first in Olympic history.

After 11 hours of talks, the German negotiators manage in the evening to convince the gunmen to leave for Cairo with the hostages onboard a plane placed at their disposal.

At around 10 pm the eight militants and their nine hostages are taken by helicopter from the Olympic Village to the Fuerstenfeldbruck military air base, where German police had decided to mount a rescue operation.

Five police snipers open fire on the group soon after they land.

A gun battle erupts, in which a Palestinian fighter throws a hand grenade into a helicopter that explodes.

Towards midnight the West German government spokesman Conrad Ahlers says the rescue operation has been a success and the hostages freed.

AFP journalists at the scene, however, report that “a battle is raging. Machine gunfire can be sporadically heard, isolated gunfire also, no doubt from the elite marksmen”.

The police call a news conference in Munich, but one of AFP’s reporters at the airport, Charles Bietry, is sceptical, suspecting a diversionary tactic. He decides to remain at the scene with two colleagues from French newspapers.

He later reports seeing a man in suit and tie emerge from the airport, his face stained with tears.

“Everything went wrong, all the hostages are dead,” the man, who turns out to be the mayor of Munich, Georg Kronawitter, says in German.

Bietry persuades a couple to take him by car to a phone box from where he calls his editors.

“The worst thing was hearing on the radio the chants of joy coming from Israel” where they believed the hostages had been saved, he said.

At 2:16 am Munich time AFP announces to its clients around the world that “all the hostages have been killed”.

German authorities only confirm the scoop, one of the biggest in AFP’s history, 56 minutes later.

A total of 11 Israelis have been killed, including the two members of the team killed at the outset, along with a German policeman.

Five hostage-takers are also killed and three are arrested.

As controversy rages over the botched police operation, the International Olympic Committee announces on the morning of September 6 that the Games will continue.

“I am sure the public will agree that we cannot allow a handful of terrorists to destroy this nucleus of international cooperation and goodwill we have in the Olympic movement,” its President Avery Brundage says.